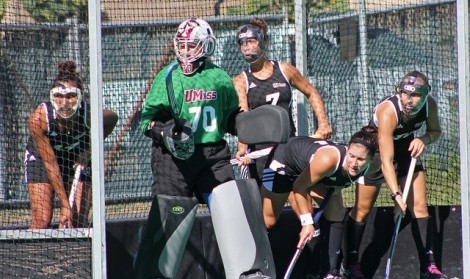 In a game that was winnable for either team, Massachusetts field hockey goalie Sam Carlino was in top-notch form Sunday afternoon in a 1-0 loss to No. 9 Stanford, thwarting a number of Cardinal attacks.

Despite the loss, Carlino and UMass’ defense limited the Cardinal to one goal on 17 shots in Sunday’s tightly-fought affair that had plenty of Stanford attacks and counterattacks.

Carlino finished the game with nine saves and one goal allowed. She dove left and right on multiple occasions and was consistently aggressive in coming out of the net to clear the ball.

Her one blemish on the scoresheet came on the game’s only goal in the 45th minute Sunday, when a redirection shot off the stick of Stanford’s Lauren Becker beat Carlino on the Cardinal counterattack following a UMass turnover.

Despite the disappointing loss, Carlino said she was pleased with the overall performance of the Minutewomen (5-4, 1-1 Atlantic 10) and their defense against a top-10 opponent in Stanford.

“Stanford is a really good team and I think we played the best we have all year,” Carlino said. “We finally put a good game collectively together.”

UMass coach Carla Tagliente added that Carlino’s performance played a major role in the Minutewomen’s ability to keep the game within reach throughout the matchup.

“She had a great week of practice. We’ve been working on some things to build her confidence back up,” Tagliente said about Carlino. “She had a great day and the defense in front of her did a great job of making the shots she faced easier shots.”

The Cardinal (7-3, 0-1 America East) applied a lot of pressure on Carlino as it controlled the ball in the Minutewomen’s circle for what seemed like minutes at a time. But Carlino remained calm and confident throughout during Stanford’s offensive outbreaks.

“You just have to remain poised during the whole thing,” Carlino said. “They can’t score outside the circle, so if we keep them out we win. Collectively as a defense we played really well.”

Despite facing 17 shots Sunday, Carlino praised her defense’s performance in front of her for making many of the shots easier for her to handle.

“There were a lot of really hard hit balls and we stayed tight on them,” Carlino said. “We gave a couple corners away that I was hoping we wouldn’t give away; they have a strong corner unit, but we did really well overall.”

Tagliente reiterated that the amount of shots Stanford took, when broken down, were not all legitimate shots on goal. Some were from penalty corners and others were simply just wide of the goal.

“You’ve got to look at the stats lightly. How many of there shots were on goal? And how many came off of penalty corners and re-penalty corners? If you re-stat all that out, it’s probably about 10-to-5 or 10-to-4 (in) shots instead of 17-to-5,” Tagliente said.

Tagliente added: “I know the stats aren’t in our favor, but if you look at possession time and amount of time we spend in their 50, it’s equal to or higher to the other team.”

Overall, Tagliente was happy with UMass’ defense and its well-rounded game.

“It’s helped that we have finally found some consistency in the back. All of the girls have been doing a great job that rotate in there, but the three backs all took a little time to get settled this season,” Tagliente said. “Now they work really well together and they are doing a nice job of jelling back there.”

The Minutewomen have four days off before they begin a four-game road trip starting at Saint Louis on Friday.