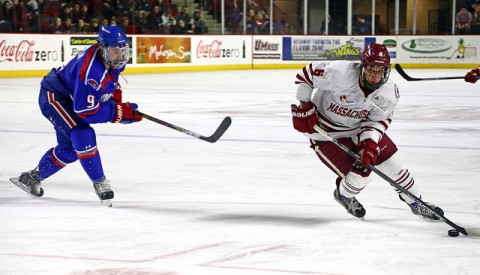 Massachusetts hockey’s Dominic Trento spent years discussing the idea of biking from his hometown in Brockport, New York all the way to New York City, but never set out on the journey.

This past July, he decided he’d talked about it long enough.

With not many details planned out, and approximately 500 miles to travel, Trento and his close friend Carlos Ross gathered the necessary essentials and embarked on the long-awaited trip.

“We’ve always rode bikes and it was something we wanted to do for a while and we finally had some time to do it,” Trento said. “We didn’t know much about it, but it worked out pretty well for us.”

Ross, who has known Trento since they were about three years old, said it was a team effort to make the idea come to life. In the past, they had taken shorter trips around the state, but nothing compared to the distance traveled this summer.

“Last summer, we started riding our bikes to Rochester and back, which is 40 miles round trip, and we knew that his sister lived in Manhattan, so we said let’s try and ride our bikes down to NYC,” Ross said.

The original plan was to bike to New York City last summer according to Ross. But after Trento was forced to undergo knee surgery, the trip was postponed.

With Trento at full health this time around, Trento and Ross set out on their seven-day trip July 13. Over the week-long voyage, they faced challenges such as finding pit stops and places to sleep and eat.

According to Trento, they rode for an average of roughly 70-75 miles a day, and the most they traveled in 24 hours was 95 miles. He said they camped out every night in tents, whether it was at a designated campground, in the mountains or “basically on the side of the road.”

For food, Trento said they alternated between stopping at local restaurants and making their own meals over a fire. He added that a stop at America’s favorite fast food chain was always an option.

“If we ever saw the golden arches of McDonald’s we’d usually make a stop there just to get as many calories as we could,” Trento said.

On some days it was more difficult to face these challenges. Ross recalled two occasions where he and Trento encountered tough obstacles.

“One day it rained and we’ve never really ridden our bikes in that kind of weather, so we rode probably three hours in downpour rain,” he said. “Another time we didn’t have a place to stay, so we just pulled over and went up to a mountain on the Appalachian Trail and just figured it out for ourselves.”

But when they finally crossed into the city on July 20, it was pure elation for Trento and Ross.

“You have the wind blowing at what seems like 100 (miles per hour) and the bridge is bouncing up and down and you’re in awe of the beauty of the city and the Hudson River, as well as what you’ve just accomplished,” Trento said. “It didn’t even seem real to be honest. We were just screaming at the top of our lungs.

When asked where it ranked among the list of his accomplishments, Trento put this journey up alongside the first hockey game he played for UMass and winning the EJHL Gary Dineen Cup in 2013.

Trento compared the long, grueling trip to being out on the ice, both from a physical and mental standpoint.

“As far as the physical aspect of it, I’ve been playing hockey my whole life, but this was a lot more intense,” he said. “There were some days where I’d be climbing up mountains and your legs are just burning and you’re questioning why you’re even doing it.”

Trento compared the mindset necessary to complete the journey to the one he and the Minutemen showed last March in the Hockey East tournament against Notre Dame, where UMass prevailed after eight periods of deadlock.

“You’d cramp up and you push through it, just like you would be if you were heading into five overtimes against Notre Dame,” he said.

Being sociable throughout the trip was also something that needed to be done in order to succeed, Trento added. With their cell phones dead for the majority of the ride, Trento and Ross engaged with strangers to ask for directions, water for their bottles and other forms of help.

For Ross, seeing his best friend accomplish something like this at the age of 22 was a testament to the type of person Trento is.

“It shows what kind of character he has and how big of a heart he has,” Ross said. “We weren’t going to be denied, especially him. We knew we had to make it 500 miles, and his resilience after a crazy amount of biking was awesome.

“He’s very caring, passionate, and respectful,” Ross added. “I don’t know if anyone will believe this, but we didn’t fight once during the whole week we were together. We had each other’s backs.”