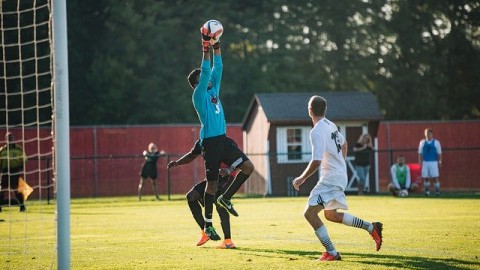 Get better every game.

Those are the words Massachusetts men’s soccer coach Fran O’Leary has been preaching to his team since the beginning of the season.

Over the last three games, it appears that those words have resonated with the Minutemen (1-7), especially the defensive unit.

After beginning the season with six straight losses, three of which UMass allowed at least three goals, the Minutemen have allowed just four goals in their last three contests.

O’Leary believes his team has made great strides defensively the last few times out, and spoke about the concept of playing defense as a whole unit.

“If you look early in the season, we took a few heavy losses,” he said.

“I think for the last couple of games we’ve been very solid, so now we’re getting into consistency. I think we look at it as team defense, so from front-to-back we’ve become a lot more consistent and that’s why we’re able to put in some competitive performances.”

While many college soccer teams opt to play a veteran group of defenders, O’Leary has decided to go in the other direction. Freshmen Dylan Cranmer and Brandon Merklin, as well as sophomore Zach Samson, have all received valuable minutes in the back for UMass.

Merklin is just one of four players who have started all eight games for the Minutemen, and leads the team in minutes played with 702. Samson has started in four of the six games he has featured in, and was responsible for assisting on UMass’ game-winning goal it its 2-1 win last week over Hartford.

“I think our young guys have done a great job for us, especially since it’s new to them,” O’Leary said. “They’re going up against some experienced players, I think against UNH their entire starting eleven was comprised of juniors and seniors, while at any given time we’re starting four or five young guys.

He added, “While the results may not reflect it right now, I think they have some valuable games under their belt, which should help when conference play kicks off in a couple of weeks.”

Although the underclassmen have played a bigger role than usual, there has been no shortage of contributions from upperclassmen. Junior Matt Pease remains a staple in the back for the Minutemen, trailing only Merklin for most minutes played with 701.

“Matt’s been fantastic. He’s a quiet, calm leadership guy on the field, he brings a calming presence to the other guys,” he said “He goes about his work in a quiet fashion, but he’s a big part of our defense.”

With the offense scoring just four goals through eight games, O’Leary knows that there is pressure on the defense to keep UMass in games.

“It’s not so much the back four or the goalkeeper. Again, it’s just important that collectively we don’t concede goals. I think we’ve given up two goals in our last two games, we got a result in one of them, and we’ve come close in the other. Once a couple goals go in, I think we’ll be fine.”