UMass Rising campaign zooms ahead despite questions about allocation 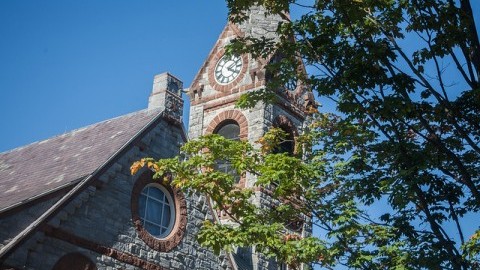 The University of Massachusetts’ UMass Rising Campaign, a fundraising effort the University began in April 2013, reached its target amount this summer, almost a year ahead of schedule.

The campaign, which had a goal of raising $300 million by June 30, 2016, hit $310 million at the beginning of the summer. As of June 30 of this year, the campaign raised $317,181,981. Funding for the campaign has been carried out as a supplement to regular soliciting from alumni for the University’s Annual Fund.

“In this campaign, the idea was to raise money for academic research, for buildings and infrastructure, for scholarships, for faculty endowments, and also to restore the Old Chapel,” said University spokesperson Daniel Fitzgibbons.

The planning for the campaign began years ago, said Fitzgibbons, but was only announced in 2013. By then, about a third of the donations had already been lined up or promised by donors. Since then, money from alumni and corporations in all fields has flowed in en masse.

Some of the largest donations were to support new buildings for athletics. Among them were an $11 million donation, which helped to pay for the basketball team’s new Champion’s Center, and $2.5 million that went to building the press box at McGuirk Stadium.

On the campaign’s website, the goals for each fundraising area are listed: $97 million for research programs, $55 million for scholarships, $54 million each for faculty and infrastructure, and $40 million to support the Annual Fund.

However, the project has received some criticism for not making student scholarships a larger priority and failing to reach out to the student body to see where more funding was needed.

Charlotte Kelly, communication and outreach director for the Center for Education Policy and Advocacy, said that the money allocated directly to students is “absolutely not enough” given the tuition and fee increases being applied in the coming year.

In particular, she critiqued the campaign for its expensive renovation of the Old Chapel.

“I would love to know how many students actually care about the Chapel,” said Kelly, who has also spoken on behalf of the Student Administration Accountability Coalition.

Jeremy Tibbetts, a Student Government Association senator, noted in an email that, “The Old Chapel renovations cost over $22 million – that money alone could pay for over two-thirds of the projected fee increases for this coming year for all students.”

UMass Rising lists the cost of the Old Chapel restoration at $21 million, $2.5 million of which is slated to come from campaign funds.

“I wonder how much sense there is in getting an investment from a donor who puts their money into a university without consulting the students for what we need,” Tibbetts said. “We (at the SGA) are not part of any decisions regarding how the money from the campaign is used, and to my knowledge have never been consulted about it. I certainly was never asked.”

Although Fitzgibbons said that student groups were likely consulted about the allocation of funds, it is unclear if that is the case.

The issue of allocating the money is hugely complex due to the variety of donations the campaign has accepted. Some are direct contributions, where a donor writes a check for a certain amount of money and it goes directly into University funds; some donations are structured over several installments; and some are simply commitments in a donor’s will – known as bequests – which may not make their way into the hands of the University for many years.

Furthermore, the majority of the donations are earmarked for a specific purpose from the very beginning, like the donations to the athletic department. According to Fitzgibbons, most of the alumni who give larger amounts of money want it to go to a certain program or area of interest related to what they did during their time at UMass.

Often, those donations go toward athletics or research, rather than student scholarships.

As much as students and university officials might want money for their own purposes, he said, they take what they can get. Fitzgibbons said he hopes to see more money for student scholarships and faculty endowments come in as the campaign continues.

The campaign will continue to raise money until its end date of June 30, 2016.

Isaac Burke can be reached at [email protected]