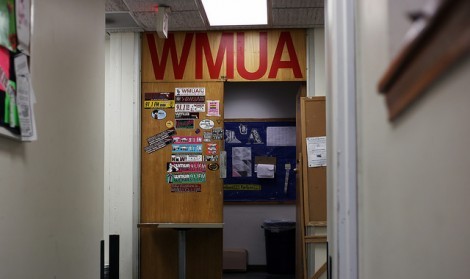 The petition, signed by 30 community members at WMUA, requested that they meet with the chancellor before Oct. 1.

Members met Monday night at Blue Wall prior to a WMUA general body meeting to discuss their response.

“We don’t have any problems with the students, we never have,” community member coordinator Louise Dunphy said. “We had already decided the only issue is the student leadership.”

Community members said students were guilty of abuse of process when they filed complaints that led to the removal of former station adviser Glenn Siegel and former host Max Shea last spring, and that student leaders continue to make decisions concerning the station’s future with a lack of clear communication and regard of consequences.

Shea had his station membership revoked and was issued a no-trespass order on April 22, banning him from the UMass campus for two years.

In their petition to the chancellor, members wrote, “WMUA is in a crisis that started back in April with the removal of a long time community DJ … through a closed process cloaked with secrecy and innuendo.”

Members demanded that student leadership misconduct be investigated, and that Shea be informed why he was banned from UMass.  They also requested the appointment of a qualified UMass adviser and the holding of a mediatory meeting between community members, student leaders and a university representative.

The general body meeting led to an animated discussion between community members and students on the possibility of mediated meetings and what members deemed to be a lack of communication on students’ end.

“You’ve tried to cut off business and stifle communication again and again,” community member Hollis Wheeler said directly to the student leaders that led the meeting. “It’s our station.”

Wheeler said members’ concerns did not stem from the investigation of Shea or Siegel, but issues with operation management, mishandling the station’s bylaws and lack of clear communication.

General Manager Andrew Desrochers disagrees with Wheeler’s sentiment toward student leadership. “We want to give everyone a voice here, but we also want to manage our students first.”

Some students within the organization sense the divide between community members and themselves.

“It’s very frustrating for the students,” student John Andersen said. “They all treat the manual like it’s the Holy Bible … and just keep pounding the same complaints over and over again.”

Desrochers agreed with members that mediation could be helpful to resolve conflicts between the groups. “If we can create a space away from our general body meeting, this will give people more of an opportunity to voice their concerns.”

He believes that despite membership issues, the station has accomplished a lot this semester. On Saturday, the station put on its annual fall concert with a high turnout rate.

“We’re trying to regain the station we once had, but I believe we’re still a really strong station,” he said.

Kristin LaFratta can be reached [email protected] and followed on Twitter @kristinlafratta.