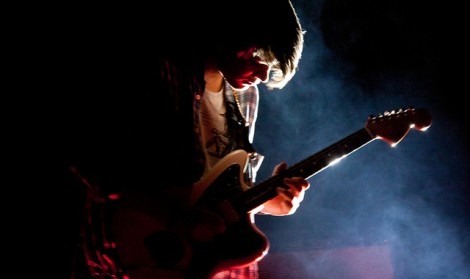 When I first heard Youth Lagoon’s debut album, “The Year of Hibernation,” it sounded like a message in a bottle.

It was a piece of art created by someone who had emerged from youthful isolation only to run back when he saw the realities on the other side. More than anything, it revealed itself to me as a sort of exciting movie trailer, and a warning for the future.

Trevor Powers, the sole musician behind the Youth Lagoon project, said on the song “Seventeen,” “When I was seventeen/my mother said to me/Don’t stop imagining, the day that you do is the day that you die” and “I was having fun, we were all having fun.”

When I heard those lines for the first time – at the age of 17 myself – it made me frame my experiences in a different way. As hard as it was to do at that age, I tried to, every once in awhile, step back and take stock of the seemingly never-ending tide of experiences that occur at that crucial transition between youth and adulthood.

Maybe that was why Powers’ second Youth Lagoon album, the far more enveloping and sonically aggressive “Wondrous Bughouse,” made little sense to me at that time. Just as I felt like I was finally internalizing the messages of “The Year of Hibernation,” Powers unleashed a paranoid, jagged record with carnival-like instrumentals and outsized ambitions.

As “The Year of Hibernation” lost its youthful grip on me though, “Wondrous Bughouse” finally settled in my mind. Of course Powers, who practically cowered away from the listener on that debut, would want to make his point on the second go-around by grabbing them by the collar and shaking them.

Though he still sounded like a ghost right out of “Scooby Doo,” he wanted to make sure he was heard and that the listener was sure he was no longer someone who was shying away from the world.

On “Savage Hills Ballroom,” released Sept. 25, Powers maintains that unmistakable, quaking falsetto, but reinvents himself and his presence otherwise.

Where “Wondrous Bughouse” was lengthy and frequently overwhelming, “Savage Hills Ballroom” is brief, its presence fleeting. Undoubtedly his most personal record, Powers presents his songs as loose sketches of his wandering, troubled mind; rather than as a unified snapshot of it at a certain moment.

Consequently, its moments of brilliance, of which there are many, appear suddenly before slinking away. There’s also a dichotomy at work here- with Powers confidently commanding his songs in a way he never has before, but sounding uncertain whenever one of the album’s songs begins to really roll along.

As Powers begins intoning over this pristine instrumental, one gets the feeling that he can really take the song anywhere. But, the addition of a rhythm section simply speeds the song up a little, without forcing Powers to escalate the inherent tension in the melody.

It is a beautiful song, but it’s stuck in a sort of grey area between the cavernous piano ballads of “The Year of Hibernation” and the stratospheric build-ups of “Wondrous Bughouse.”

Powers takes a couple unlikely stabs at social commentary on “Rotten Human” and “Again.” On the former, he rails against “foods diseased by altered seeds” and “the clones” who’ve always said to “stay in line,” while crooning “Through aisles of cans you walk/ ‘Cause you’d rather spend than grow a crop” on the latter.

And, while “Rotten Human” may be the album’s brightest musical moment, with chilling synths and spellbinding guitar shimmers, the anti-GMO railing on both tracks sound more than a little out of place within the greater context of the record.

Elsewhere, Powers bounds between playful (the surprisingly upbeat lead single, “The Knower”) and mournful (the piano instrumentals that close the album’s two sides.) And while he sounds convincing in each, with his constant maneuvering, it can be tough to get a sense of “Savage Hills Ballroom” as a whole.

Maybe it’s the fact that we as an audience need to get used to hearing Powers as this unguarded. Maybe he needs to get used it too.

Jackson Maxwell can be reached at [email protected], or followed on Twitter at @JMaxwell82