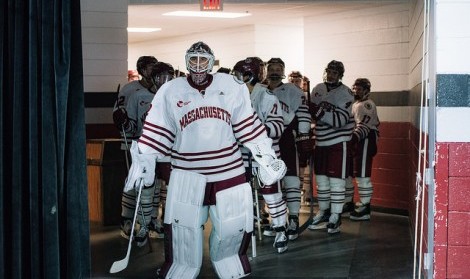 A year ago, the Massachusetts hockey team got blown out in its home opener 8-1 against conference rival Boston University.

The Minutemen (2-0) look to flip the script this Friday night when they return to the Mullins Center for the first time in 2015-16 for a non-conference affair against Sacred Heart.

In its first two games of the season, UMass went out west and swept Colorado College, including a come-from-behind 4-3 victory Saturday night.

“In the first half of the year you’re trying to learn lessons and show that you can do a variety of things,” he said. “So the fact that we could both play with a lead and hold a lead in the same weekend, I think those are both good things for our group.”

For a UMass squad that boasts 19 underclassmen, Micheletto believes the 2-0 start will provide his players with the belief they can handle any in-game situation that arises.

“Wins cure a lot of things,” he said. “There’s always that extra bit that it helps with the belief of the system going forward. As we talked about, in similar situations as we go forward, we’ll be saying, ‘Okay, we were down three and we came back’ and, ‘Oh, we were up four and held a lead.’”

He added: “Those are all things that we can lean back on and kickstand on as we move forward and hopefully keep building from there.”

Sophomore Dominic Trento, who recorded two assists over the weekend, said the anticipation is clearly rising in the locker room ahead of Friday night’s matinee with the Pioneers (0-0-1).

“It’s super exciting,” he said. “We’ve got a bunch of young guys and then a big group of sophomores and for the seniors that are here it’s going to be really exciting.

Through six periods of play, UMass has outscored its opponents 10-6. Last season, it took the Minutemen four games to reach that output.

So far, it’s been the trio of Austin Plevy, Dennis Kravchenko and Shane Walsh who have made waves for UMass offensively, combining for 14 points on eight goals and six assists.

Plevy, a freshman, opened his collegiate career with a five-point weekend, putting together a hat trick and an assist in his debut last Friday.

Micheletto said he was extremely pleased with the performance of his offense, which saw additional contributions outside this trio.

“I liked the fact that we had 12 guys involved in the scoring over the weekend,” he said. “I liked that our power play sent the puck around really well, both on the entry as well as on the in-zone.”

“It’s good, especially after last year,” he said. “I think everyone’s clicking with each other and that comes from off-the-ice stuff too. I think the team’s really close and it’s something we haven’t seen in a while so I think that’s nice.”

Micheletto added that one of the most encouraging signs from last weekend was the team’s ability to develop offensive opportunities from its own defensive end.

“We did that a lot, and that just shows the puck movement, it shows availability and awareness on our guys away from the puck,” he said. “In the early going, that’s something that usually something that develops over time, so the fact that we had that was really good.”

In terms of what to expect from Sacred Heart this weekend, Micheletto knows the Pioneers will present a different challenge than the Tigers (0-2).

“They’re fast and they’re aggressive,” he said. “Where last week we were on an Olympic sheet and may have had an extra half-second of time to make a play and see a play develop, these guys are going to be on us in a hurry. They play a more aggressive style than (Colorado College) does. We’ve got to be able to accept the pressure and expect it.”

Trento believes the game will come down to capitalizing on chances, something he felt his team did a great job of last weekend.

“We got outshot both games and still were able to capitalize on every opportunity that we got,” Trento said. “I think the power play will play a big role in that as well as our kill to keep them out of our net.”

Jason Kates can be reached at [email protected] and followed @Jason_Kates