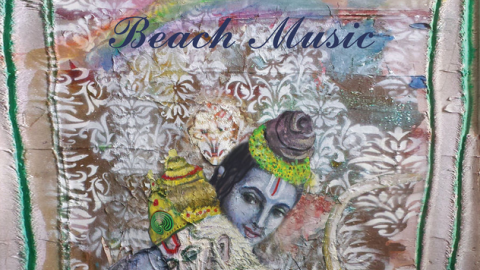 Though it may be more his personality than the humble origins of his records, you never get the feeling that Alex Giannascoli wants to pepper his music with big, sweeping moments.

His fantastic breakthrough album, 2014’s “DSU,” had songs that slithered their way almost apologetically into your brain. Whispery vocals, scratchy production, ramshackle rhythms and not-quite-in-tune guitars made for an unassuming combination, but one that proved rewarding when Giannascoli’s impeccable pop hooks floated so easily above those coy sounding instrumentals.

And though his debut album for indie giant Domino Records, “Beach Music,” beefs up his production values ever so slightly, it is easy to see that Giannascoli isn’t ready to turn Alex G into an accessible, household name.

He seems to almost toss off his best material in the album’s early stages, radically pitch-shifting his voice towards the end of “Bug” to an Alvin & the Chipmunks-type falsetto. One gets the sense that Giannascoli does it to throw the listener off the song, which isn’t easy considering the beauty of its melody, his vocals and the fluid layers of guitars that envelop the song in a blanket of warm familiarity.

The nervy riffs that power the equally wonderful and tuneful “Kicker” also seem uneasy, like they are afraid to give the listener too much to grasp onto.

These blissful bits of hazy guitar pop are what Giannascoli has always been best at, but “Beach Music,” released Oct. 9, shows that his mind is clearly elsewhere. “Salt” is a four and a half minute-plus oddity of swampy, creeping guitars (think a half-speed take on the riff to the Police’s “Every Breath You Take”) and more pitch-shifted vocals in the chorus.

He follows this with “Look Out,” a hodgepodge of swirling electronics, stoic beats and falsetto mutterings that never really manages to coalesce into any real form. “In Love,” by far the album’s most left-field excursion, sounds like a lounge-jazz funeral march.

In a recent interview with Consequence of Sound, Giannascoli stated that he wanted the song to evoke a David Lynch film, an atmosphere he certainly succeeds in conjuring. His vocals are more nasally on this track, and are mixed to sound like he’s whispering right into your ear, while the melancholy trio of piano, bass and trumpet plays far off in the distance behind him.

Even when Giannascoli wanders back to more familiar territory, he seems intent on disrupting any lines of easy connection. On the beautiful “Brite Boy,” he employs pitch-shifting yet again to create a duet with himself, offering little in the way of his own rich, comforting voice.

The muted ballad “Mud” ends far too quickly, exactly at the two-minute mark. “Station” plays with the grace of a beautiful ballad at first, but descends almost immediately into a wild meltdown of effects and warped voices. And yet “Beach Music’s” closer, “Snot,” evolves from an uncertain bit of psych-pop to a dazzling, guitar-centric jam by its end, with a refrain that could go on for a half an hour without growing dull.

With his prolific output (this is the 22 year-old’s seventh full-length LP), it’s clear that Giannascoli could easily churn out a masterpiece of nothing but gems like “Bug.” But for some reason, his adventurousness on “Beach Music,” and his unwillingness to turn in something easy so Domino could fast-track him to theater-headlining indie stardom, makes him all the more intriguing.

While part of me may want to be spoon-fed more laconically perfect pop, I am more than happy to take a few more Lynchian detours to get there.