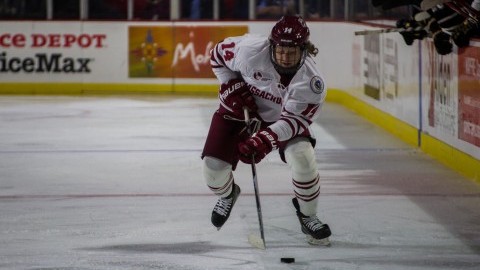 Last year, the Massachusetts hockey team got blown out by Boston University 8-1 in its season opener. This year, it was the Minutemen who came flying out of the gates in Colorado Springs.

Behind a hat trick from freshman Austin Plevy and a 39-save performance from sophomore goaltender Henry Dill, UMass (1-0) defeated Colorado College (0-1) 6-3 Friday night to open its season with a victory for the first time since 2012.

Minutemen coach John Micheletto thought his team clicked on all cylinders in the win, despite being outshot 42-21 Friday night.

“I liked mostly everything we did (tonight),” he said after the game. “We managed the game really well and killed an early penalty, which early in the season and on the road is not easy to regain your momentum from, but I thought we did a really nice job.”

Micheletto singled out the special teams as a key part in the Minutemen’s success. The Tigers finished 2-for-7 on the powerplay, while UMass went 3-for-6 on the man advantage.

“I thought both sides of it were really good,” Micheletto said. “I know we gave up two power play goals, but in general I thought it was excellent. We spread the ice well and found some passing lanes and most importantly, had presence and the hunger, which was good in all aspects.”

In his collegiate debut, Plevy was the first UMass player to record a hat trick since Michael Pereira did so in 2012. He’s also the first freshman to do so since 2008 when Michael Marcou achieved the feat.

Plevy said he was ecstatic with the result in his debut.

“Obviously being our first official game as a team it’s gonna be a little difficult with nine freshmen trying to learn a new system. Mix that with being on the road at high elevation, I know it definitely affects you,” Plevy added. “But I think we prepared ourselves pretty well for that and we got a really good road win.”

Perhaps the turning point of Friday’s game was the second period, when the Minutemen exploded for three goals, two of which came from Plevy and the other from senior Shane Walsh.

“(Austin) was very good, good in all facets of the game,” Micheletto said. “He played well man-up, man-down, as well as even strength. It was certainly a nice introduction to college hockey for Austin.”

Micheletto also attributed Plevy’s success to the play of his line mates, including sophomore Dennis Kravchenko, who recorded three assists and an empty net goal to seal the victory for the Minutemen with 18 seconds left.

“He was certainly beneficiary of really nice play by Dennis on the one, but played with a lot of pace and put pucks away and blocked shots,” Micheletto said.

“I think that’s a testament to where our team culture is right now in the early going, that our freshmen logged big minutes and did the little things that are important to us winning the game,” he added.

Nine different UMass players registered a point, with Plevy and Kravchenko leading the way with four.

Like Micheletto, Plevy credited his personal success to the play of the guys he was playing alongside. He was flanked by Steven Iacobellis and Walsh for the majority of the game.

“There were great plays made by my lines mates. I was standing at the back door and had a pretty wide-open net, so I attribute a lot of that to my teammates,” he said. “Obviously the line I’m playing with there are two really great players in Shane and Steven, so I’m pretty grateful to be playing there as a freshman.

“The personal success is always awesome and makes you feel good, but the more important thing is to get the win and we did that.”

Despite two late five-minute penalties and a push from the Tigers – Colorado College outshot UMass 19-to-5 in the third period – the Minutemen hung on and come away victorious.

“I think it’s huge for our confidence,” Plevy said. “Obviously last year was probably a year to forget, and I know a lot of guys that’s kinda been our motivation all summer. We want to make a name for ourselves and I think getting our first win here makes everyone feel really good.”

“Winning’s a really good thing, that didn’t take me very long in coaching to realize,” Micheletto added. “It makes all those bumps and bruises from shot blocks and taking a hit feel better, and puts a little wind in your sails.”

It will be a quick turnaround for UMass, who plays another game against Colorado College Saturday with a 9:07 p.m start.