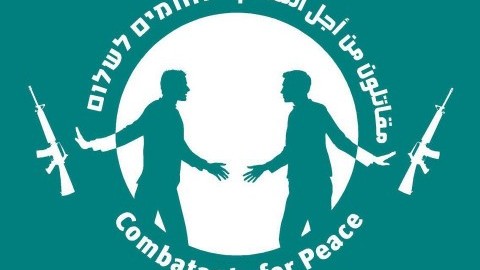 Two people, who at one point were on the opposing sides of one of the Middle East’s bloodiest conflicts, stood in front of a hundred people at Hampshire College Wednesday night and advocated for a peaceful resolution to the Israeli-Palestinian conflict.

Former Israeli and Palestinians fighters coordinated to discuss their experiences and the effectiveness of nonviolent methods to bring peace to the Israeli-Palestinian conflict.

Combatants for Peace is an organization consisting of former Israelis and Palestinians soldiers. They have engaged in an U.S. tour to discuss the conflict and encourage political and social action. Made up of former Israeli soldiers and Palestinian fighters, members of the organization once took part in the cycle of violence generated from the conflict.

The theme of the event focused on transformation. As the conflict persists and more people are killed as a result, Khatib and Katz have noticed that some soldiers have realized that nonviolent resistance is an effective alternative.

Khatib was born in Jerusalem. He and his family struggled against oppression from the Israeli forces. At 14, when the first intifada broke out, Khatib was arrested after he attempted to attack two Israeli soldiers for their guns. Khatib served 10 years in an Israeli prison, where he received most of his education. During his time in prison, Khatib began exploring nonviolent methods to resist oppression. He made his first act of nonviolent resistance when he participated in a hunger strike in prison.

“It seems that people may react too quickly to (dangerous) situations,” Khatib said. “For me, I try to look for the nonviolent ways.”

In 2000, when the second intifada broke out, Khatib preached for a nonviolent reaction to Israeli occupation.

In 2005, Khatib and other ex-prisoners met with former Israeli combatants who refused to serve the Occupied Palestine territories. After overcoming suspicions and misunderstandings, the two groups formed Combatants for Peace.

Maya Katz was born in Israel. She felt obligated to contribute to her country, and joined the Israel Defense Forces at 18. She provided radio service and monitored live footage of drones in south Lebanon during the Israeli-Lebanese conflict.

“It was what I had to do. I didn’t question it at all,” Katz recollected.

After being informed of Combatants for Peace from a close friend, Katz decided it was in her best interest to learn the Palestinian perspective of the conflict.

“No matter where I go, I see violence everywhere. That is why I joined Combatants for Peace,” Katz stated.

Every year, Combatants for Peace organizes the Israeli-Palestinian Memorial Day ceremony in the city of Tel Aviv, an event that acknowledges the pain and struggle both sides experience during the conflict. Thousands of Israelis and Palestinians attend the event each year to share their stories according to Combatants for Peace.

“Our goal is to get the conflict to be transformed into a nonviolent one,” Khatib said.

The organization believes that dialogue and meetings are tools to achieve understanding of both sides of the conflict.

The organization hopes to establish a Palestinian state, along with the State of Israel.

“The United States has an important role to affairs in the Middle East,” Katz said. “It’s our responsibility to take action to end the conflict.”

The second Combatants for Peace speaking event in the Pioneer Valley area will take place in the Congregation B’nai Israel in Northampton on Oct. 8 at 7 p.m.