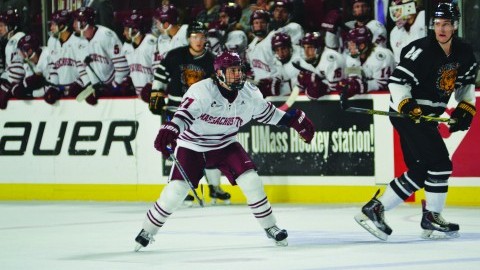 There’s a long list of players and coaches who deserve recognition for the Massachusetts hockey team’s hot start to the 2015 season.

High-flying scorers like Dennis Kravchenko and Austin Plevy are certainly near the top of that list. Freshmen defensemen Ivan Chukarov and William Lagesson have also made an immediate impact, while coach John Micheletto and his staff have put together winning combinations so far.

But two or three players alone can’t win games. On good teams, the entire roster makes contributions every night, and third and fourth line “glue” guys are crucial for any winning team to have.

In the first four games of the season, freshman forward Ryan Badger has been just that – a bottom-six forward that’s done the dirty work and brought energy to the team on a nightly basis.

“He’s been one of those constants on and off the ice, coming into practice and working his bag off, and he plays the same way in the games,” sophomore forward and linemate Keith Burchett said. “He’s a 100 percent max effort guy all the time.”

At 21 years old, Badger is older than the typical freshman, even by college hockey standards. He played a few years of junior hockey after high school, as most players do, but his road to UMass has been a long and winding one.

“I went through the junior process. I was actually committed to Maine at first,” Badger said after practice on Monday. “I ended up de-committing and talking to a few schools in the area, and when I finally talked to coach (Ryan) Miller, coach Micheletto and coach (Joey) Gasparini, they had a lot of positive feedback, and said I could earn an opportunity here and that’s what I’m all about. I really liked what they had to say.”

Micheletto explained the recruiting process from his point of view.

“I certainly knew about Ryan during his ascension as a young player… but once he committed to Maine, you kind of lose track of those guys,” he said. “When he became available, it was a guy we were interested in right away … we were fortunate that it worked out both from our part as well as his that he wound up here.”

Micheletto also praised his work ethic and called Badger a “student of the game.”

Most expected Badger to be a depth player for the Minutemen, but he’s seen playing time right away, appearing in all four games and scoring one goal. Monday, he was asked if he expected to find himself in the lineup so early and often.

“No,” Badger said, “but I’m glad that I am and really happy that it’s happened. I just have to keep working hard.”

According to both Badger and Micheletto, the opportunity to earn playing time right away was a major factor in bringing the Hainesport, New Jersey native to Amherst.

This weekend, Badger will travel back to New Jersey as the Minutemen will play in the Capital City Classic in Trenton, which is only 30 to 40 minutes away from Badger’s hometown. His parents will be in attendance, and he said he’s been flooded with text messages from friends in the area looking for tickets.

“Playing close to home will be an incredible feeling,” Badger said. “Playing in front of friends and family is always a good thing, and hopefully I can just play a normal game and play strong.”

UMass will open the tournament with a Friday afternoon matchup against Maine at 4:30 p.m., and will face either Yale or Princeton on Saturday.