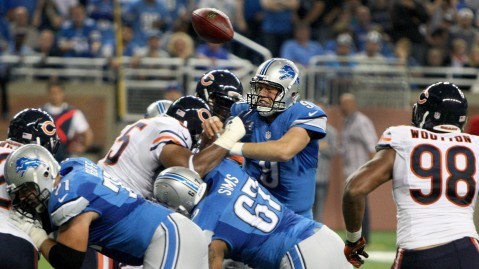 Detroit Lions' Matthew Stafford fumbles the ball, but recovers it for a touchdown during second-quarter action against the Chicago Bears at Ford Field in Detroit, Michigan, on Sunday, September 29, 2013. (Kirthmon F. Dozier Detroit/Free Press/MCT)

The Bears have two wins while the Lions have zero, but that doesn’t tell the complete story for these two NFC North rivals. Detroit played tough games against the Broncos and Seahawks before getting blown out by Arizona, but the Cardinals might be the best team in the NFC. Chicago, meanwhile, has squeaked by against the Raiders and Chiefs. I still don’t trust them, and I think Detroit is ultimately the better team, so I’m taking the home favorite in this one.

Michael Vick has not been the disaster some expected when he took over for an injured Ben Roethlisberger at the helm of the Pittsburgh Steelers. LeVeon Bell is the best running back in the league. Those facts were the main reasons why the Steelers beat the Chargers Monday night, but they’re going up against a completely different animal Sunday. The Cardinals defense is dynamic, their passing game has been effective with Carson Palmer back under center and coach Bruce Arians is not the type to let a backup like Vick off the hook. Expect turnovers, and expect that this one could get ugly for Pittsburgh’s offense.

It’s a trap! At home, in cold weather, against a Kirk Cousins-led offense seems too good to be true for a Jets defense that’s been a nightmare to play against this season. But the Redskins are a more resilient team than most realize, and of their three losses, only one has been by more than one possession. Besides, New York has had next week’s showdown against the Patriots circled on its calendar for the entire offseason. New coach Todd Bowles has certainly cleaned things up a bit, but the Jets are still the Jets until they prove they are better than a potential letdown game like this one. For that reason, Washington is my upset special of the week.

The question isn’t if New England will cover in this Sunday night matchup. No, the real mystery of this game is how many points they will do it by. Much better Colts teams than this version have squared off against Tom Brady and the Patriots and have seen dismal results. Indianapolis is 3-2, but all three wins have come against AFC South opponents. And the wins weren’t even convincing; the Colts would have been lucky to win two of them, let alone all three. New England, on the other hand, is on a revenge tour for the treatment it received this summer in wake of an over-inflated ball-deflation scandal. And while they won’t admit it, Indy is the marquee stop on that tour. Combine that with a banged up Andrew Luck against a surgical Brady looking better than ever, and it certainly appears the Colts are about to get thrown out of the club.

After a slow start in the third year of the Chip Kelly regime, the Eagles found life after beating the Ryan Fitzpatrick-led Jets and a Saints team playing outside the atmosphere-controlled Superdome. I don’t think Philadelphia is as bad as its first few weeks indicated, but the Eagles still aren’t a team I’m ready to trust. As for the Giants, a reborn Eli Manning has them rolling. When he’s slinging the football around like he did Sunday night against the 49ers, he’s a top five quarterback in the league, and he showed he’s still got it in the clutch with a late drive to push New York to victory. The Giants are an infamously streaky team, but with three wins in a row and Eli looking the way he has under center, I expect them to stay hot, even on the road. And the Eagles are switching to their all-black alternate uniforms for this Monday night showdown, a sign they could be psyching themselves out before the game even begins.