Guns are here to stay 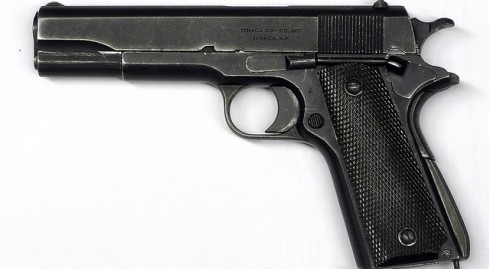 There is no group more upset with the contemporary gun debate than gun enthusiasts themselves. But to be clear, this is not because we are having a national conversation about the very legitimacy and proper legal boundaries of their hobby. Indeed, most gun owners know there are rational arguments for certain forms of gun legislation from varying ideological perspectives. What causes the angst is the ignorance and generalities that emanate from the anti-gun left day in and day out.

The most prominent and influential gun control advocates, such as Rep. Diana DeGette, former Rep. Carolyn McCarthy, former New York City Mayor Michael Bloomberg, and Vice President Joe Biden, have all made complete fools of themselves over the past few years when discussing gun specifics. DeGette was challenged regarding a ban on high-capacity magazines that she supported, and was totally unaware of the simple fact that magazines and clips could be reloaded with new ammunition once empty.

McCarthy was pushing a piece of legislation following the Virginia Tech shooting, and was asked what a barrel shroud was on live television. A barrel shroud is a gun safety accessory that protects users from overheated firearm barrels, and for whatever reason these would have been banned under her own legislation. She described them as a “shoulder thing that goes up,” clearly confusing it with something like a gun’s stock.

Michael Bloomberg, who bankrolls anti-gun activism, didn’t even know the difference between semi-automatic and automatic firearms in an embarrassing television interview. Of course, the difference is an incredibly important legal distinction.
And finally, the vice president decided to dish out the following piece of advice to his wife regarding the use of a shotgun: “Just walk out on the balcony here, walk out and put that double-barrel shotgun and fire two blasts outside the house.” Firing your gun in the air violates basic firearm safety and many laws as well.

Gun owners take notice. What they see is a group of coastal liberal elites, most of whom are members of the media and political classes, and all of whom think gun owners are too stupid to know what’s best for them. What they see is a movement run by people who are too lazy and stuck up to do the proper research, to immerse themselves in America’s long and rich gun heritage, so as to learn something about the people and objects their legislation will directly affect. What they see is a group of elitists who are willing to throw away our founding rights under natural law in exchange for a smug sense of moral superiority. And the saddest part is, gun owners are completely and totally right about all of these things.

A bit of advice to my friends on the left: this is why you keep losing on guns, and will continue to lose on guns. Your leaders, all the way up to the president, simply do not put in a good faith effort. In his recent press conference on the tragedy in Oregon, the president offered no specifics whatsoever. He only alluded to the generalities of the tragedy in Oregon. Well, what the heck are they? Banning barrel shrouds again? What specifically would have stopped the Oregon shooting, and what will stop the next one as well? We are all ears.

Conservatives will continue to point out that American gun violence has gone down significantly over the past two decades, all while gun ownership has remained fairly stable, and that homicides aren’t necessarily more common in states with looser gun laws (as one example out of many, Texas had fewer murders per capita in 2013 than California); that most gun control legislation is short-sighted, reactionary and rarely would have done anything to prevent the previous shootings which motivated it; that self-defense, whether against criminals or a state, is an elementary natural right that deserves special protection; that conservatives will keep winning on this issue, because America is a gun country with a long and storied culture that cannot and will not simply be upended by a few elitists who aren’t happy with that reality.