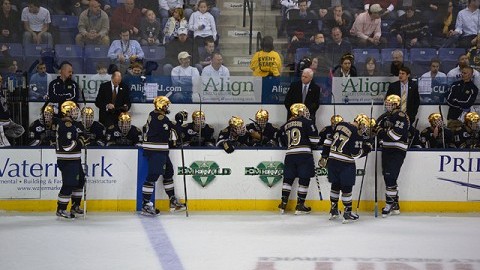 Facing a top opponent in No. 6 Minnesota Duluth, Notre Dame rallied to earn a 3-3 draw on Friday in its home opener at Compton Family Ice Arena. It was the second tie of the season for the Fighting Irish, who move to 1-1-2 on the young season.

Notre Dame’s comeback was led by senior forward Sam Herr who scored the game-tying goal at seven minutes, 32 seconds of the third period on an assist from fellow senior forward Steven Fogarty, who notched two assists on the evening and leads the Irish with six points this year.

The Bulldogs (2-1-2) jumped out to a 2-0 lead just 10 minutes, nine seconds into the first period. The Irish turned over the puck while trying to clear it down the ice, and UMD senior winger Austin Farley capitalized to open up the scoring at six minutes, 27 seconds of the first. The second Bulldogs goal was scored by junior forward Alex Iafallo as he beat Notre Dame sophomore goalie Cal Petersen up high after a three-on-two break by UMD.

The Bulldogs looked like they were handling Notre Dame well in the second period; the Irish collected four penalties in the first seven minutes of the period. Despite the power play opportunities for UMD, Irish defenseman Justin Wade scored a short-handed goal (the first of his career) at nine minutes, 39 seconds after Fogarty fed him a beautiful centering pass.

Inspired by the shorthanded strike, Notre Dame followed up the Wade goal with an equalizer at 13 minutes, 54 seconds of the second period, as a Bobby Nardella shot ricocheted off a Bulldogs defenseman and snuck past sophomore goalie Kasimir Kaskisuo to tie the game 2-2.

At five minutes, 27 seconds of the third period, UMD senior forward Austyn Young poked one past Petersen on a rebound from a shot after a faceoff in Notre Dame territory. The Bulldogs held the lead at 3-2 for only two minutes, until Herr scored a power-play one-timer to tie the game.

It wasn’t always pretty for the Irish, who were outshot 42-29, but toughness and strong penalty killing helped Notre Dame earn a point out of the non-conference matchup.

With a concerted defensive effort and 21 saves, goalie Thatcher Demko and No. 4 Boston College won their third straight game via shutout, finishing a sweep over Colorado College with a 5-0 win on Saturday in Colorado Springs.

Demko followed up his shutout of the Tigers on Friday night by saving all 21 shots he faced on Saturday. Senior defenseman Teddy Doherty and junior defenseman Steve Santini led the charge defensively for the Eagles (4-1), who only allowed five shots on goal in the third period of Saturday’s win.

Junior forward Adam Gilmour kicked off the scoring frenzy at two minutes, 23 seconds of the first period on a deflection from junior defenseman Scott Savage’s shot. Gilmour would tack on another goal in the third period, the fifth and final goal of the game, on a power-play blast. Gilmour now has the second most power-play goals in Eagles history, with 10.

Also adding goals for BC were junior Austin Cangelosi and sophomore Alex Tuch.  Sophomore forward Zach Sanford added a short-handed goal to go along with his two assists en-route to a three-point game.

The Eagles are set to take on Denver this Friday at home to kick off a five game home stand.

Zach Perry can be reached at [email protected]