How to spice up your Halloween costume this year 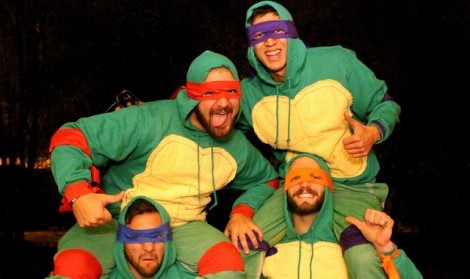 Halloween weekend is here, which means its costume time.

For those still wondering what to dress up as, don’t lose your head – unless you’re considering dressing up as a headless horseman – because this story breaks down the top costumes of the year. In most cases, creating any of these costumes should be simple.

The Day of the Dead  is a huge theme this Halloween in both decorations and costumes . So, how do we make a costume for this traditional holiday?  All that’s really needed is some white makeup and black eyeliner. Cover your face completely in white makeup  and then draw some intricate, skull-like patterns on your face, specifically around your mouth, eyes, cheekbones and forehead.

For some tutorials on creative designs, head to YouTube  (user Iris J. does a good one). Women can wear a black dress and add to this costume with some red flowers or colorful scarves or belts to tie around their waist. Men can wear a suit jacket, a bow tie or colorful tie and a classy  hat.

Emojis are another trendy costume this year, and, luckily, they are pretty easy to create. Toss on an all-black outfit and either print an image of an Emoji out, or cut up some construction paper and draw an Emoji face on it. Then, paste (or tape) the image onto your shirt.

Of course, you can be more specific with your Emojis: dress like the red dancing lady with a red dress and red shoes, wear a pink shirt and blue jeans for the girl Emoji, or wear blue shirt and brown pants for the boy Emoji. You can also go as a group of Emojis or Emoji couples with other people.

Two major events spark the inspiration for the next two costumes.

The first is the ongoing political campaigns. There should be plenty of Donald Trumps and Hillary Clintons at Halloween parties this year. For Trump, wear a blazer or suit with a red tie and, of course, invest in a men’s super tacky blonde wig. For Clinton, wear a black or blue suit with big black sunglasses, and, of course, invest in a woman’s super tacky blonde wig.

The next major event for Halloween inspiration is the release of the new, long-awaited Star Wars movie, “The Force Awakens.” I find  that the easiest characters to recreate under a time constraint are Han Solo and Leia. Han Solo (for men and woman) includes the use of generic autumn clothes, such as a long sleeve shirt, a vest, leggings or jeans, a brown belt, and boots.

For Leia, all that’s needed is a white dress and a tutorial on how to make those hair bun loops (see YouTube for that as well ). You can also throw together a generic Jedi costume with a brown jacket, brown boots, a brown belt and a tan or white top and bottom.

The piñata costume is also super trendy this year, and is also a relatively easy one to make. All you need to do is paste a variety of colorful tissue paper to a shirt or dress.  Add a party hat with tissue paper on it for an added fun effect.

An easy one for groups is the Ninja Turtle crew. Just get some green shirts or sweats and paste a turtle shell print out on the back and front. Then, either use colored headbands or ribbons so people can tell which turtle you are.

It might not be Oct. 3, but you can still dress up as the “Mean Girls” on Oct. 31.  Just wear pink (I know it is not a Wednesday, but it works for the costume) and a skirt.  A lot of people try to stick to the movie cover for inspiration on which Gretchen wears a plaid skirt and a dark pink sweater, Regina wears a white shirt, pink sweater and a pin skirt, Karen wears a pink sweater and dark pink skirt, and Cady wears a red sweater and jeans.

Another cute group costume is the “Spice Girls” costume. Everyone in your group picks a spice; if you are lacking resources to paint a cardboard spice cutout to wear, just print out a label of your favorite spice and pastes it to a shirt. To add to this costume, wear a red hat like the cap to the spices .

If all else fails, oldies like the nerd costume, fairytale character costumes and witches can be easily thrown together in a pinch.

Annamarie Wadiak can be reached at [email protected]