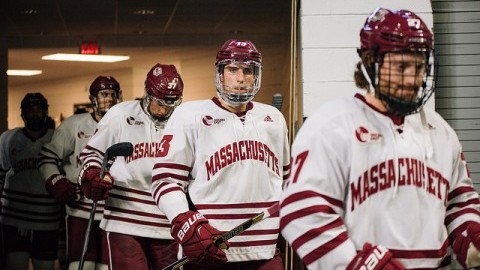 Take one look at the Massachusetts hockey roster assembled by coach John Micheletto for the 2015-16 season and there are several things that stand out immediately.

For one, there’s only two seniors on the team (Shane Walsh and Ben Gallacher), while 19 of the 26 roster spots are occupied by underclassmen.

The senior class is tied for the smallest not only in the Hockey East, but in the entire country. On the flip side, the incoming freshmen class of nine is tied for seventh largest in the nation and the 19 underclassmen are fifth most of any team in Division I hockey.

Oh, and Brandon Montour and Frank Vatrano, who combined for 18 percent of UMass’ points a year ago, are no longer on the roster, with both players bolting for the NHL at the conclusion of last season.

When you combine these three factors, it leads to the belief that UMass will have a hard time getting itself out of the bottom of the Hockey East.

Starting with the defense, four out of the nine freshmen will man the blue line, including NHL draftees William Lagesson and Ivan Chukarov. While these two, plus incoming goaltender and reigning AJHL most valuable player Nic Renyard, add much needed help to a defense that allowed an abysmal 4.2 goals a game a year ago, the question of how long will it take for these young players to adapt to the college hockey style of play is undoubtedly raised.

That’s not to say the defense won’t be vastly improved, but adjusting to a new system and adapting to the physicality of a conference like the Hockey East won’t happen overnight.

Regarding Renyard, that’s another question that can be asked: What will the goaltending situation be?

Henry Dill, who started 19 games between the pipes in 2014-15, will be returning for his second year in Amherst and will do his best to not let a freshman waltz right in and assume the role of starting goaltender. It seems like Micheletto will have a decision to make regarding who gets the brunt of playing time.

Offensively, the Minutemen will miss Vatrano, but they return several players who are more than capable of being depended on to put the puck in the back of the net. Top producers like Steven Iacobellis, Dennis Kravchenko and Shane Walsh return to the roster, as well as guys like Patrick Lee, Dominic Trento and Ray Pigozzi, who will continue to make contributions for UMass.

After that, though, the options are limited.

Freshmen like Austin Plevy (who I believe will have a Kravchenko-esque first year) and Kurt Keats could put up some points, but they cannot be relied on to put up numbers on a consistent basis, especially early in the season.

Then there is always the conference the Minutemen are in. This year, the Hockey East boasts four teams in the top 20, including Boston College and Boston University, who are ranked No. 1 and No. 3 respectively. Providence checks in at No. 7 and UMass Lowell checks in at No.  14 as well. Other conference opponents like Notre Dame, University of New Hampshire and University of Vermont are also all receiving votes.

This does not spell good news for UMass, as it goes through a five-game stretch in January where it plays No. 12 Yale, the Terriers, a home-and-home with the River Hawks and a home matchup with the Golden Eagles at the Mullins Center.

At the end of last year, I wrote a column discussing how exciting hockey would return to Amherst, and I still think it will. Micheletto has assembled a youthful squad that has the capabilities of turning some heads around the conference. But questions will be raised early on and the Minutemen will have to prove that they are capable of beating some of the better teams in New England and beyond.

Who will be the starting goalie this Friday against Colorado College? Will Lagesson and Chukarov form a duo that will make everyone forget about the name Montour? Will Plevy have the same type of freshman year that Kravchenko had last year?

The answers will come soon enough.