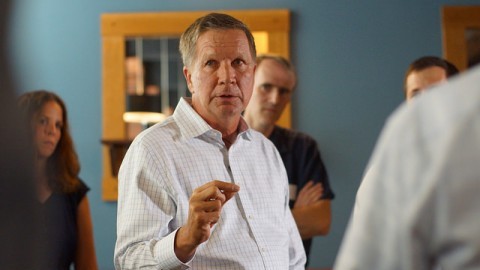 America recently tuned in to watch the first Democratic presidential debate, and it saw five contenders sharing similar platforms in a conversational manner. Granted, at times conversation became contentious, but the night felt much more like a roundtable discussion from “Meet the Press” than it did a political debate.

On the right side of the isle, GOP contenders continue to brutally hack away at each other, employing a divide-and-conquer strategy by using bluntly placed wedge issues and personal attacks. Their “debate” – which was overcrowded and filled with lively dramatic performances and cutthroat verbal jousts – has been nothing more than a political bloodbath. The nightmarish process has implored many of us watching to ask whether civility has gone the way of the typewriter, landline phones or reasonably-priced political campaigns.

The Democrats hold the advantage of appearing unified and civil, at least for now.

A centrist skeptic, I went about reviewing the policy backgrounds of many of the candidates from both sides of the isle. I watched a variety of speeches, both stump and on stage, as well as a mish-mash of interviews. Through this process, I kept finding myself coming back to Ohio Governor John Kasich and reviewing his various stances.

Having always assumed he was an establishment Republican, I was shocked to find his ideology to be filled with hidden pockets of progressivism, and his career defined by compromise. With no scandals, a lifetime of public and private sector experience, as well as a tendency to unify his party and break up on-stage fights, the candidate who many pundits are calling “too nice” to become president is someone to watch in the GOP playing field in the coming months. A deeply religious man, it came as a shock to many that he stands as perhaps the most tolerant candidate on stage regarding the Supreme Court’s decision surrounding gay marriage. During the first Republican debate, moderator Meghan Kelly posed the question of how the Ohio Governor would react if one of his daughters came out as gay.

Kasich, in one of the more human moments of this entire election season, responded, “I just went to the wedding of a friend of mine who happens to be gay. Because somebody doesn’t think the way I do doesn’t mean that I can’t care about them or I can’t love them. So, if one of my daughters happened to be that, of course I would love them, and I would accept them.” It was an unscripted determination which ended with Kasich becoming emotional with the words.

“God gives me unconditional love,” he said. “I’m going to give it to my family and my friends and the people around me.” The crowd broke into thunderous applauds.

Though a longtime congressman, he has avoided bending to the will of his party. He expanded Medicaid for low-income individuals in his home state while serving his first term as governor, indirectly supporting Barack Obama’s landmark healthcare bill in doing so. Although Ohio is a swing state, such a move was a risk for a first-term executive in the Midwest. Clearly, he didn’t have politics in mind.

“When I get to the Pearly Gates, I’m going to have an answer for what I’ve done for the poor,” said Kasich in a fiery tone in response to a critical reporter. This move has created a lot of contention between him and the GOP establishment.

The Ohio governor also takes a lenient stance on immigration, stating; “I would prefer for them to be legalized once we find out who they are because they can – I think they contribute a lot to America,” which is  a pragmatic and sincere way to wedge himself from the far right. An understanding comfort after Trump’s hateful “rapists” and “criminals” commentary surrounding America’s undocumented newcomers, Kasich instead describes those making a new life for themselves in another light.

“They’re hard workers, they’re God-fearing, they’re family-oriented,” he said in an interview with CNN’s Dana Bash. His tone often suggests a lack of patience for those spewing bigotry and a commitment toward putting an end to the constitutional cherry picking surrounding the matter; “Let these people who are born here be citizens and that’s the end of it. I don’t want to dwell on it.”

While he remains a staunch supporter of charter schools, he stands with Obama on Common Core. He went so far as to passionately call out members of his own party for not supporting the improved standards of public education throughout the country, suggesting that his GOP colleagues are more driven by politics than substance. His political weight and bipartisan presence on such an issue will unquestionably help to close many of the ideological gaps surrounding education.

The salt of the earth bipartisan, who often pulls the plug on the teleprompter, has been polling middle of the pack in Iowa but has made noticeable strides to the top tier in New Hampshire. Kasich, who often serves as the unofficial moderator during debates will undoubtedly shine brighter when his policy record kicks blind showmanship off the stage. So often Americans ignore the healthier option when it comes to voting.

Yes, people like Donald Trump and Bernie Sanders draw large crowds and garner hope for their respective followers. Certainly. Hillary Clinton and Jeb Bush remain household names, and of course Carly Fiorina and Ben Carson look good as outsiders. However, its time to focus on the moderate, the candidate who puts honesty over pending polls, integrity over belligerence, and one who knows the president leads a nation, not a party.