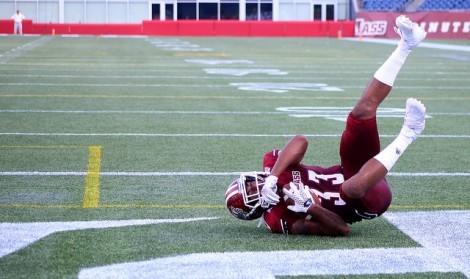 Notre Dame Stadium and its sold-out capacity of 80,795 seats may not be the easiest place to begin a college career as an opposing kicker, but that’s exactly the position Massachusetts freshman Mike Caggiano found himself in last weekend’s 62-27 loss in South Bend, Indiana.

Caggiano relieved senior Blake Lucas at placekicker after Lucas missed his second consecutive point-after-attempt, and immediately converted on all three of his extra-point attempts in the nationally televised matchup.

The New Jersey native now looks to solidify his role as the Minutemen’s placekicker, as he finds himself in a competition with starting punter Logan Laurent for the role in advance of Saturday’s game against Florida International at McGuirk Stadium.

“I just have to go out there every day as if I’m trying to protect my spot,” Caggiano said after Wednesday’s practice. “I’m just out there for a good competition.”

This marks Caggiano’s second kicking competition since arriving in Amherst. Throughout fall camp prior to the regular season, Caggiano battled Lucas for placekicking duties before UMass coach Mark Whipple named Lucas the starter after camp ended.

Caggiano saw the field for the first time as a Minuteman early in the second quarter against the Fighting Irish last Saturday. Following a 1-yard touchdown run by freshman running back Sekai Lindsay, Caggiano lined up for his first extra-point attempt and converted to trim Notre Dame’s lead to 14-13 at the time.

Caggiano said that while he was inevitably nervous when lining up on what he called the “No.1 college football stadium in the country,” he had no trouble maintaining focus.

“Every kicker is nervous on their first kick especially when it’s in front of all those people on national television. But it was definitely fun for my first time,” he said. “I just let all the nerves go away, locked everything out and pushed it through.”

Caggiano added that he was not given much warning prior to taking the field.

“I found out I was kicking on that drive. I just got to the net, did some dry runs and got out there,” Caggiano said. “Then I got off the field and looked back and was kind of like, ‘Alright, first kick out of the way.’”

Lucas finished 1-for-1 on field goals and 4-for-6 on PAT attempts before being removed from placekicking duties. He will continue to be the Minutemen’s kickoff specialist, according to Whipple.

Laurent, Caggiano’s new competitor, finished 4-for-6 on field goals and 13-for-18 on PAT attempts in a part-time role last season. While Caggiano hasn’t attempted a field goal yet in his college career, he said the approach won’t be any different than his three extra-point conversions last weekend.

“Mentally, it’s all the same scenario,” Caggiano said. “Field goal, extra point, every kick has to be the same kick no matter where you are on the field.”

Whipple said Tuesday that senior safety Khary Bailey-Smith will miss the remainder of the season with a knee injury, and will have surgery on Friday.

Redshirt freshman Charan Singh will start in his place Saturday against FIU, according to Whipple.

After an ankle sprain limited Singh coming out of fall camp, he recorded three tackles in an enlarged role against Notre Dame, with Bailey-Smith, who had 18 tackles and an interception this season, sitting out of the trip.

“He’s a really good athlete and he’s always made plays on the ball,” Whipple said. “He’s always been around the ball and we’re hoping for the same thing.”

Senior Joe Colton, who was playing in a linebacker role, will transition back to safety as well against the Panthers. He started at safety all of last season.

Aside from Bailey-Smith, defensive back Kelton Brackett and defensive lineman Sha-Ki Holines have also missed time in practice this week due to injury. Brackett was seen in pads and a knee brace Wednesday while Holines did not participate in drills.

According to Whipple, the decision on whether they will play against FIU will come later this week.