NBA 2K16 is an eye-popping sensation 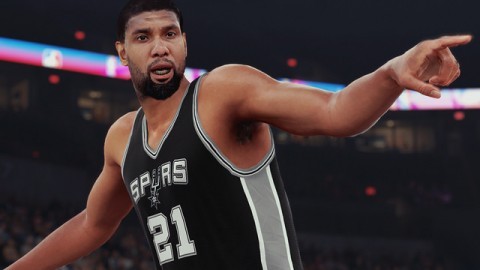 The greatest aspect of NBA 2K16 is its reusability. Launched on Sept. 29, 2K16 can be played over and over again, and it never gets old because of the changes producers added from last year’s game.

The biggest change is to the MyPlayer mode, as is annually so. In this game mode, the player creates a customized character and goes through life as an NBA player on the way to superstardom. This has been a popular mode since NBA 2K10, but it has really developed over the years. Sometimes your player goes right to the Rookie Showcase and straight to the NBA, other times the player needs to walk-on to a team after going undrafted.

In 2K16, however, the mode starts during the character’s senior year in high school, and the player must decide on which college to attend. Only after a few high school and college games does your character enter the NBA draft. Back in 2K14, the game introduced a story mode within MyPlayer, but in 2K16, the cut-scenes are much longer, and writer-producer Spike Lee designs a story that is much more developed.

While the back-story adds depth to the game mode, it takes forever to get to the NBA, which is the whole point of MyPlayer in the first place. Getting drafted requires an arduous two or three hours of gameplay, and once in the NBA, there is an eight-game maximum in your rookie year.

I prefer when I can play every game and develop my player like I did in 2K14. I was able to improve my player from a 60 overall to a 90. It felt leisurely and enjoyable, like a video game should. An emotional connection is supposed to be developed with the player, but in 2K16, there is too much time spent watching fixed cut-scenes and not enough time on the court developing skills.

Another feature of NBA2K16 that takes a new spin is MyGM mode. As a sport management major, I love this mode. I essentially get to live out my dream of being a general manager of an NBA team in a video game under realistic terms. You have your pick of any team in the league to manage. There are meetings with team owners, who outline the season goals that need to be  accomplished. This mode gives the player a chance to develop a team into a title contender and the finished product is rewarding, knowing how much work was put in to rebuild from the ground up.

Not only do the producers take great pride in the graphics, but the soundtrack is excellent as well. Over the years, the game has featured well-known songs like “Lose Yourself” by Eminem, “Radioactive” by Imagine Dragons and “Viva La Vida” by Coldplay. 2K16 doesn’t hold back, with largest soundtrack ever recorded available to players in this edition. There are over 50 songs that range from M.I.A. to The Ramones. The songs are comprised into six playlists, three of which are made by DJ Khaled, DJ Premier and DJ Mustard. While navigating the menus, songs like “I Want You to Know” by Zedd, “Rise and Shine” by J Cole and “We Dem Boyz” by Wiz Khalifa add excitement to mundane browsing.

Overall, “NBA 2K16” was worth the buy. While 2K fans alike still wait in anticipation for the MyPlayer mode to allow transfers of old players from one game to the next, the franchise has made a lot of improvements with the graphics, soundtrack and new and improved game modes. That shouldn’t be overlooked, and it’s ultimately why this year’s 2K is worth the buy.