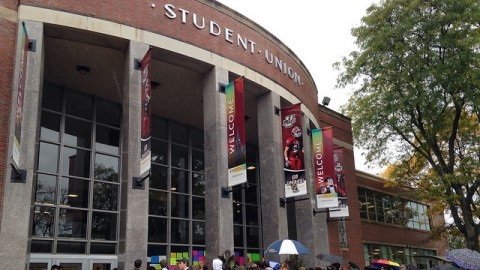 The new registered student organization draws inspiration from the Oxford Union at Oxford University, a debating society that promotes discussion on a variety of controversial topics and attracts many different kinds of speakers.

University Union was created as a response to the lack of debate organizations on campus. Owen Wiggins, president of the RSO, and vice president Michael Maldari formed the organization with the help of their faculty adviser and UMass history professor Daniel Gordon.

The group’s mission statement addresses the issue of public lectures on campuses as being frequently one-sided and usually not engaging seriously with opposing viewpoints. The organization hopes to fix that problem by presenting their audience with different points of view they may not necessarily believe.

“You get the speaker’s viewpoint, and the audience is usually there to nod in agreement. But you don’t learn how thoughtful people articulate opposing viewpoints,” Gordon said. “Some students on our campus are starved for debate. The University Union is responding to this need for a drama of ideas and all this implies about the nature of truth and belief … rather than the usual monologue.”

University Union not only believes that debates are more entertaining than monologues, but that they are also more enlightening due to the exposure of multiple perspectives.

“We hope our viewers leave our debate and bring the topic back to their dorm room and they don’t have let the conservation end when our event ends. It is a rare occasion that two sides of such a controversial issue is presented on college campuses, and that is something we wanted to change,” Maldari said.

The first debate hosted by University Union, “Opposing Views on Israel and Palestine,” will be held in the UMass Student Union Ballroom on Oct. 27 at 7 p.m.  The event is sponsored by the Students for Justice in Palestine and the Student Alliance for Israel.

UMass Professor Joseph Levine and Yousef Munayyer, UMass alumnus and executive director of the U.S. Campaign to End Israeli Occupation, will represent the Palestinian perspective. UMass Professor Jay Berkovitz and Smith College Professor Justin Cammy will also join the debate, representing the Israeli perspective.The Israeli-Palestinian conflict has generated a variety of opinions and viewpoints, and University Union believes the topic is one worthy of discussion due to its controversial nature.

“(The) reason we chose this topic is because it tends to be very polarizing. But if we can bring people together on this topic, then we show that we can easily have a civilized exchange of opposing views on many other issues,” Gordon said.

Wiggins and Maldari brought speakers educated on the subject to represent both sides of the debate.

“Professor Berkovitz was our first contact because our president, Owen Wiggins, had class with him. Berkovitz referred us to Professor Levine, who agreed to take part in the debate. Berkovitz then got Professor Cammy to take part, and at Professor Sut Jhally’s suggestion, we asked Yousef Munayyer to be a partner with (Levine),” Maldari said.

University Union encourages UMass and Five College students to attend the event as well as future debates on other controversial issues, whether they have interest in the Israeli-Palestinian topic or just want to see an engaging debate with different perspectives.