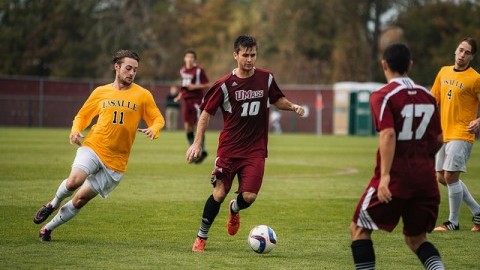 Both times, the ball found the back of the net.

“It was a terrific result,” head coach Fran O’Leary said after the game Wednesday. “We played a very good La Salle team, we’ve said this before–they have a fabulous coach, they’re well set-up, and have some talented players.”

“It was a real hard-fought encounter and we’re delighted to come away with three points,” O’Leary added.

This was UMass’ fourth victory of the season, surpassing last year’s win total of three and earning its third conference win of the year to move it to a tie for second within the A-10 with 10 points.

For Ellis, whose goals were his first two off the season, this was a contest where three points was a must.

“It was hard-fought. Obviously, we needed to beat them to secure a spot over them in the tournament, so it was pretty big for us to beat them and knock them off,” Ellis said. “They’re a team that consistently makes the playoffs, so beating them is pretty good, especially at home.”

Ellis added: “Going into the last three games of the season sitting on 10 points, anything can happen, so it’s pretty big considering the start we had.”

The game-winner for the Minutemen came in the 64th minute, approximately 14 minutes after La Salle’s Andrew Connors had knotted the game at one in the 50th minute.

A stranger to taking penalty kicks, Ellis was given the chance by his teammates to take the lead not once, but twice for his team, and he delivered.

“I haven’t been on penalties all year, and they gave me both of them,” Ellis said. “I stepped up and took both, the first one the kid jumped early so it gave me time, and the second one I had to do a little bit more, but it was nice.

Ellis’ first penalty kick came in the 20th minute to break the scoreless tie. Senior forward Mark Morris drew a penalty against a La Salle defender in the box that allowed set up Ellis to beat Mike Kirk on his first goal of the season that gave UMass a 1-0 lead.

UMass held the slight advantage in shots, 16-15, however the Explorers finished with six saves compared to the Minutemen’s two.

O’Leary praised his captain’s ability to have success on both penalties, and felt it was a proper reward for a hardworking player.

“It’s tough for the same guy to have two in one game because he’s already shown his hand to the keeper in the first one, but they were two fantastic penalties, no doubt,” O’Leary said. “The keeper didn’t get close, he just kept his nerve.”

Despite the number of fouls (36) and yellow cards (five) between the two teams, O’Leary didn’t believe the game was a dirty one.

“You’re going to get games where it wasn’t dirty, but it was two teams fighting,” O’Leary said. “La Salle’s fighting, we’re fighting to get up the league, and I don’t think there was a bad foul in the game.”

“Everyone knew it would be a bit sloppy,” Ellis added. “We were ready for it, every A-10 game is like that, so you have to come out ready to play.”