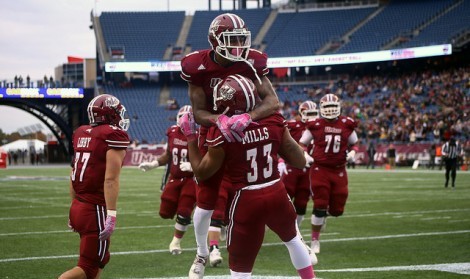 Sometimes a vacation is all that’s needed.

And while this weekend’s trip to Muncie, Indiana for the Massachusetts football team isn’t the ideal tropical destination as the winter months approach, it serves as the perfect getaway for UMass (1-6, 0-3 Mid-American Conference) to start fresh and turn its season around.

“I think away games are good because you become tighter as a family,” senior linebacker Jovan Santos-Knox said.

He added: “This away trip is exactly what we need. We’ve been at home and there are so many distractions when you’re at home, people here, family there. When you are on the road, it’s just us against the world it feels like. Ball State is a great team and we can’t go in thinking ‘well we won last year, this is going to be a walk through.’”

The Minutemen have underperformed in their past two games at home, the first a 15-10 loss against Kent State at McGuirk Stadium on Oct. 17, and the second last Saturday when they watched their 28-10 halftime lead quickly evaporate in a 51-35 defeat.

Road games haven’t been kind to UMass, as it’s fallen in all three of its contents this year by a combined score of 172-79, including letting over 60 points against both No. 9 Notre Dame and Bowling Green.

The Cardinals (2-6, 1-3 MAC) enter Saturday in a similar position as the Minutemen, as they have lost five consecutive games. Ball State also watched a halftime lead disappear last weekend in a 23-21 loss against Central Michigan.

“We need a good team effort all the way through, on both sides of the ball,” coach Mark Whipple said. “We certainly did it last week in the first half, but 60 minutes is what we need, from both sides.”

Offensively, the Cardinals offer a balanced attack as they have 1,865 passing yards compared to 1,330 rushing yards.  They have 12 rushing and 12 passing touchdowns on the season.

Freshman quarterback Riley Neal has been one of the lone bright spots for Ball State as the dual-threat freshmen has thrown for 1,522 yards with 11 touchdowns to just two interceptions. The two interceptions are the fewest among MAC starting quarterbacks.

“He’s a freshmen so you want to send different pressures at him, different blitzes, different things for him. Things he hasn’t seen before,” Santos-Knox said.

Santos-Knox added: “We’ll try to mess up his timing. He’s a really good quarterback and he has great receivers too. Some different pressure from different ways is the best way to get to him and get him off his game.”

Ball State uses a pair of running backs in Darian Green and James Gilbert to head its rushing attack. Green leads the team with 103 carries for 559 yards while Gilbert’s seven touchdowns are the most on the team.

Santos-Knox said the Cardinals’ experienced offensive line is a big reason why their running game has been as successful as it’s been.

With the second half of the season now underway, UMass’ seniors know that their games are numbered and have all made a serious commitment to turn the season around.

“I want to have my best five games, no matter what. I want to do the best I possibly can. I know every senior here is thinking the same thing. They want to make their mark on these last five games,” Santos-Knox said. “I don’t see any quit in anybody, that’s not in anyone’s vocabulary right now. I think we can get on a little run and a 6-6 season is a successful season, so that’s what we are going for.”