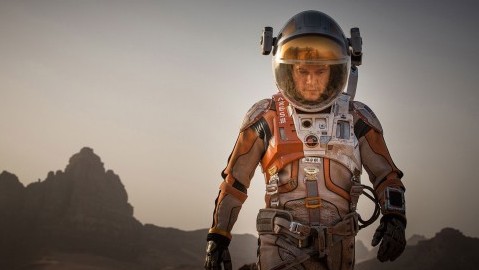 “The Martian” opens with the apparent death of astronaut Mark Watney (Matt Damon) after he and his crewmates on the Ares III mission to Mars in 2030 desperately attempt to evacuate when a storm on the planet’s surface forces them to abort their planned stay.

What follows is an incredibly tight, beautifully shot, absolutely gripping adaptation of Andy Weir’s 2011 novel of the same name. The film, which is two hours and 20 minutes in length, provides a substantial amount of story to tell, but there is no slack in Ridley Scott’s direction.

Alive, but stranded without a way to contact NASA or his successfully evacuated crew, Watney must survive with only the tools and supplies left behind for the original, month-long mission. For posterity and to keep himself sane, Watney records himself in video diaries throughout his process. Damon has fun with the role here, successfully embodying the goofy wit and gallows humor of lines that frequently come directly from Weir’s novel.

Back on Earth, Dr. Vincent Kapoor (Chiwetel Ejiofor) convinces the director of NASA, Teddy Sanders (Jeff Daniels) to give him a little satellite time to take reconnaissance photos of the aborted mission site and evaluate what supplies might remain for future missions. When satellite communications officer Mindy Park (Mackenzie Davis) executes the request and notices evidence of movement around the mission site, a crisis erupts at NASA, which, per public records law, must release the photos within 24 hours.

Sanders decides to get in front of the news immediately, coordinating with Kapoor and public relations director Annie Montrose (Kristen Wiig) for the inevitable explosion of the media circus.

Meanwhile, the decision is made to withhold the news from Watney’s crewmates aboard the spacecraft returning them to Earth in order to keep them concentrated on their mission home. This is a less thoughtful or effective decision than intended.

We get various small moments showing us the crew grappling with grief and survivor’s guilt, most acutely Captain Melissa Lewis (Jessica Chastain), who gave the order to leave Watney behind as the storm threatened to topple their evacuation vehicle.

Back on Mars, Watney, a botanist and mechanical engineer, has figured out how to use vacuum sealed potatoes originally meant for the crew’s Thanksgiving dinner to start a crop in a section of the habitation unit.

Much comedy is derived from Damon’s performance as he uses literal rocket fuel to kick-start the production of the volume of water he needs for the crop, and, more crudely, his own “evacuations” to provide the necessary ingredient to make Martian soil viable for farming.   Planning for an attempt to re-supply and then rescue Watney back on Earth are Sanders, Kapoor, Montrose, and Park, in addition to flight director Mitch Henderson (Sean Bean), Jet Propulsion Lab head Bruce Ng (Benedict Wong) and the brilliant but eccentric astrodynamicist Rich Purnell (Donald Glover.)

Posing an obstacle to this goal are multiple issues: no way to communicate with Watney; the limited window of time to re-supply him before he starves; the fact that the Ares III equipment and habitation unit were meant for a 31-day mission, not a period of several years; and the general inhospitableness of life on Mars, a freezing desert planet.

The sheer beauty of Scott’s vision of Mars is a victory for the film, bolstered by tight shots and convincing, gorgeous effects that would together be sufficient to give this film a place in the canon of science fiction film on their own, a canon founded in part by Scott’s direction of classics like “Alien” and “Blade Runner.”

The film generally benefits from a completely realized aesthetic concept in general: the equipment, suits, vehicles, and environments of NASA convincingly offer a vision of America’s space agency in 2030 (barring another funding cut, of course.) Adapting directly from the novel, the film’s soundtrack is rife with the hits of the ‘70s, the consequence of Watney keeping himself entertained with ‘70s-centric digital media collection of Lewis.

All of this would be moot, of course, without a good cast, and thankfully the cast of “The Martian” excels. Damon’s work is a milestone for his career, no small accomplishment of soul and wit in a demanding role. Ejiofor, Daniels, Davis, Wiig, Wong, and Glover constitute a phenomenal dynamic, each excelling at least once in a moment of their own, and offering us a vision of a team alternately at each other’s throats and behind each other’s backs.

Chastain leads a tremendous ensemble in the form of the Ares III crew, with Michael Peña, Aksel Hennie, Kate Mara, and Sebastian Stan giving us a moving picture of comrades reliant upon each other first and foremost.

“The Martian” is a standout for cinema in general, and especially in a science fiction field that has already been enjoying a several-year stretch of amazing narratives on film.