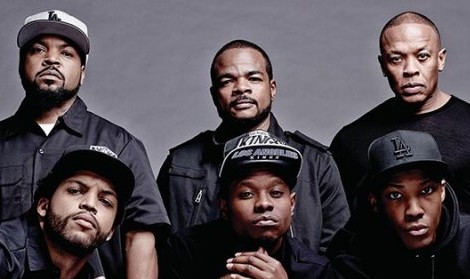 Gary Gray directed the film, which stars O’Shea Jackson, Jr. as Ice Cube, Corey Hawkins as Dr. Dre, Jason Mitchell as Eazy-E and Paul Giamatti as N.W.A. manager Jerry Heller. Heller is really sneaky, and he only gives Eazy-E his money, swindling the rest of the group. Ice Cube and Dr. Dre notice this and pursue very successful solo careers instead. Then, Eazy-E realizes that Jerry is still not being truthful and that Jerry is hiding more than he originally claimed. Eazy-E fires Jerry and attempts to reunite N.W.A, but that dream is cut short when tragedy strikes.

The film’s casting was amazing. O’Shea Jackson, Jr. is most notable in his role as Ice Cube. The rapper’s son bears an uncanny resemblance to his father, but his performance is about more than just having the right look. He digs into the part, and the entire cast around him commits to portray the story of N.W.A. exceptionally well. Everyone looks the part, sure, and they have the acting chops to boot.

“Straight Outta Compton” provides an eye-opening look at these young men’s lives in Compton before the explosion of N.W.A. I couldn’t imagine living in the kind of situation the soon-to-be N.W.A members faced. At one point, the young musicians leave a practice and get wrestled to the ground by a cop and inspected for drugs, a huge violation of their rights. Sometimes members of N.W.A would simply be standing on the sidewalk and they would be arrested, which was confusing to me.

As a fan of rap, I really appreciate what N.W.A started because they came in the late 80s and used moving lyrics that really demonstrated their life struggles. N.W.A certainly led the way for great artists such as Snoop Dogg, 50 Cent and Eminem. Without N.W.A, I doubt that present day rap would be as popular as it is.

I also appreciated that the film worked in a “Bye Felicia” – a reference to the movie “Friday.” This might be one of the most popular movie quotes of the 90s – especially because Ice Cube delivered the original line. Its appearance in “Straight Outta Compton” is not only hilarious but also perfectly timed.

“Straight Outta Compton” portrays a coming of age story for Dr. Dre. The climax of the story comes when Dr. Dre’s brother Tyree (Keith Powers) is killed in a fight. This is the first time we see Dr. Dre’s inner emotion reveal itself through his hardened shell. He reconnects with his mother and becomes a better man through this devastating experience, at least according to the film’s version of events.

I had no idea what to expect going into the film. Its two and a half hour runtime makes it feel like a marathon, especially because it is a biopic and not an action movie. Surprisingly though, the movie was not dry. “Straight Outta Compton” follows a satisfying narrative in which the members of N.W.A essentially re-write American popular culture.