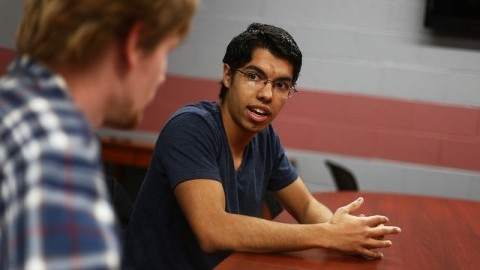 Filipe Carvalho, a senior economics and finance major, has spent much of his two years in the Center for Educational Policy and Advocacy advocating for tuition freezes and divestment of the University of Massachusetts from the fossil fuel industry. Now serving as the policy and legislative director for CEPA, he divides his time between coordinating the organization’s advocacy and coordinating ball movement on the basketball court.

You’ve been involved in a lot of activism on campus regarding student debt.  How did you get involved with this type of activism?

I am now the policy and legislative director for the year for the Center for Education Policy and Advocacy and I am also the New England regional chair in my second year for the United States Student Association.

What was your motivation for getting involved in this activism?

I’ve always had a penchant for politics or policy. I was the kid at the lunch table in high school who would say, “Let’s talk about immigration reform.” So it’s always something I’ve enjoyed, but I think a lot of it comes from where I’m from.

I grew up in Worcester, Massachusetts and I went to a high school where a lot of kids are low income, not that many kids actually go to college and if they do they go to community colleges. Even then they have to hold full time or at least part time jobs just to pay for their loans and a lot of them end up dropping out of even community college, which is highly unfortunate. So I come from a situation where everyone’s telling us ,‘You need to go to college, you need to get an education, you need to be successful,’ but they’re not actually given any of the tools and resources needed to do that.

I work two jobs on campus, I know a lot of low income folks working jobs on campus and so I just want to help out myself and the community I come from for the most part. That’s the stake I have in this.

What sort of major events in the past have you helped coordinate with CEPA regarding student debt?

I think the one I can recall right off the bat is that last year we had a student debt rally called Wear Your Debt Day. This is something that we coordinated with a grassroots community organizing class, they were great and the idea behind that is that a lot of the time we don’t actually talk about student debt. So by being out, being physical, saying, ‘This is how much I have- I’m just like you,’ it allows people to make the connection that this is a very large problem, this is a problem we should actually be talking about.

We collaborate with the Public Higher Education Network of Massachusetts, the (Student Government Association), MASSPIRG on putting together recruitment for our lobby visits every year demanding tuition freezes. Hopefully, this year we can take it a step forward and just demand free higher education altogether, but that’s in the works if you will.

Could you elaborate on the demand for free higher education that’s in the works?

While on the federal level we already have proposals for free higher education, you have Bernie Sander’s plan with the Robin Hood tax, a lot of people understand that there’s really heavy gridlock in Congress that would probably prevent a federal plan from being successful just about any time soon. It’s great symbolically and it definitely moves the conversation forward.

We want to use the state now to be the ones that are going to give us free higher education along with pushing the federal plans forward. This could be instead of going to Lobby Day and asking for a tuition freeze we can go out in full force and make an exciting demand that actually is: We want free higher education, this is how students want it to look. We think if we’re going to pass a plan like that it’s going to be on a state level. There might not be the expectation that it’s going to happen this year or next but I think it’s important to start demanding what we want as opposed to just very small things.

What types of advocacy have you been involved with that is unrelated to student debt?

We have many core teams in CEPA so we work on a lot of things. I’ve worked in the past on trying to move the conversation forward in increasing the recruitment and retention of students of color on campus. If you recall last year there was a big rally for a diversity town hall, and we tried to get our demands for increased recruitment and retention of students of color onto the Diversity Strategic Plan in order for the University to make a more conscious effort to recruit and retain those students.

Now as the policy and legislative director I try and help support the other campaigns that are going on, so I support the Fight for 15 campaign to increase the minimum wage. I support the Divestment from Fossil Fuels campaign which basically says we don’t want our endowments from our public institution to be funding an industry that is effectively destroying our planet amongst other things and other problems that arise when we’re talking about climate justice which we could go into for a while.

Do you think your field of study, finance and economics, has had any impact on your work in CEPA?

It’s interesting because it’s not necessarily the type of major you would expect of a lot of the people doing activism on campus. I don’t think it has negatively done it but it’s cool because I can have a different perspective sometimes on how to think about things.

When talking about divesting from fossil fuels for example I think that there’s a very good moral argument for it but there also happens to be a very good financial argument for it. If you do take money out of your portfolio from the fossil fuel industry, given that it seems to be in decline and its volatility is increasing, then you are actually making a sound financial decision on top of a sound moral decision. I think having some knowledge of that has been kind of useful.

What do you enjoy to do when you’re not involved in advocacy?

Yeah, I like to lift. One of the things we do with some of the folks at CEPA is get together three times a week and try to lift together. I love power lifting; I’ve been in one competition in August that was a lot of fun.

I also love to play basketball despite being 5 feet 4 inches and I really like hip hop. I love listening to hip hop and going out on weekends and dancing as opposed to just partying.

What position do you play in Basketball?