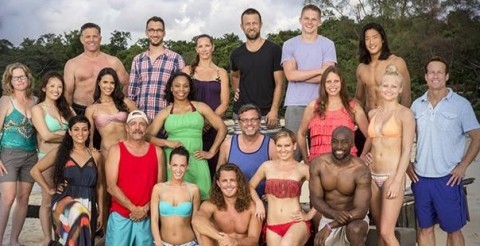 Everyone loves a good comeback story . In this year’s edition of “Survivor,” the producers turned the casting process to the fans. Months before the show began, fans could select from 30 candidates who should appear on “Survivor Cambodia: Second Chance.” All of the candidates were one-time players who did not win and felt like they had more to give to the game since the first time.

This is the first time that there is an all-returning cast of “Survivor.” Many contestants are returning after a long way away from the game. In fact, even the runner-up of the very first season, Kelly Wiglesworth, is back 15 years after his first adventure with the show in Borneo.

Immediately, there is a clear division between both tribes, and an apparent new school versus old school dynamic. The new school plays the game much faster as far as socializing and strategizing, while the old school prefers to get settled in on day one.

This first episode felt really bland, because in every contestant’s confessional – a one-on-one in which they tell the audience their thoughts about the game – contestants kept reiterating that it was “a blessing to get a second chance at the game” and that they would “fix [their] mistakes from the first time.”

Yes, I understand that you don’t want to make the same blunders. Can we please move on? I’m aware that the title is “Survivor: Second Chance,” but every time these contestants opened their mouths it felt like they were shoving that “second chance” down the viewers’ throats.

The biggest drag of the episode was tribe life. There was not much going on other than introductions and the building of shelter and fire, which are obviously important in order to survive with nine other people in the woods, but ultimately made for pretty boring TV.

This year, two tribes have been randomly assigned – Bayon in pink and Ta Keo in green. At Bayon, Jeremy Collins quickly makes an alliance with all of the better competitors, which include Keith Nale, Andrew Savage, Joe Anglim and Tasha Fox. Meanwhile, Stephen Fishbach is reliving his nightmare from “Survivor: Tocantins.” He is a brainy “Survivor” super-fan with a lot of brawn.

At one point, contestant Kelley Wentworth decides to go look for the idol. Instead of finding the hidden object, she finds a clue, which reveals the idol’s location at the challenge site. This twist  definitely added a new element to the objective of obtaining the idol, an exciting development seeing as, in recent seasons, it has been far too easy to retrieve.

It is good that the producers brought back the first challenge from the first season, “Quest for Fire.” The tribes have to lead a raft through water and light a series of torches, then one person has to use planks of wood and rope to create a pole long enough to reach a key so they can open the fence and light the final torch to win immunity. Wiglesworth played in this challenge the first season and lost, and faced the same struggles here.

Wentworth snatched the idol from underneath the raft while everyone focused on the pole. None of Bayon knows about it and their idol remains unclaimed. Hopefully they will re-hide it at camp because idol plays can be very exciting if the objects are in the right hands.

At the Ta Keo tribal council, it quickly became apparent who was on the chopping block. Ta Keo were divided between the Vytas Baskauskas and the fiery Brazilian from Season 25, Abi-Maria Gomes. Gomes says that her second chance story is all about growth, but it seems that she often annoys her tribe. However, when voting time arrived, Baskauskas was ousted 6-4.

This was one of the drier premieres in the show’s history, but I still have high hopes for the season once the second chance element simmers down a bit and we can actually get into some more hardcore gaming. We’ll have to wait until next time to see if keeping Gomes pays off for this tribe, although it seems unlikely that it will.