The magic is gone in ‘Pan’ 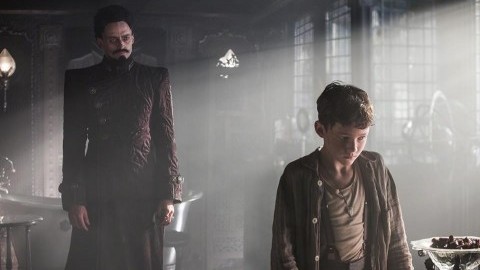 If one was to define “bad” as “the absence of any positive qualities,” then “Pan” might be the worst movie of the year.

“Pan” is a mess of film, a pile of underdeveloped, poorly cobbled together ideas that tries to disguise its blatant flaws with feeble, superfluous attempts at adding to its universe’s lore. Here is a fantasy film devoid of originality, inspiration, warmth and most importantly: magic.

Set during World War II, “Pan” is a prequel to the classic J.M. Barrie story wherein we learn how the titular Peter Pan discovered Neverland and why he can fly, which is an entirely unnecessary origin story. Young, precocious Peter (Levi Miller) was abandoned by his fairy mother at an orphanage’s doorstep. In a perfectly, unsubtly biblical reference, his mother’s name is Mary (Amanda Seyfried).

Unfortunately, this orphanage is governed by sadistic nuns who made a deal with the wicked pirate Blackbeard (Hugh Jackman, in a career-worst performance) to abduct orphans and force them to mine for pixie dust (or Pixium, as they call it on the streets).

With the help of a daring, two-handed debonair named Hook (Garrett Hedlund, who acts as if he is doing an impression of Jim Carrey doing an impression of Han Solo), Peter escapes the Pixium mines and encounters a group of “Natives.” When confronted with his flying abilities, the Natives declare him “The Chosen One” who will fulfill “The Prophecy” and vanquish Blackbeard from Neverland. Yes, “Chosen One” and “The Prophecy” are the movie’s exact words.

The movie’s story arc results from soulless focus group tests, hoping to find a skeleton of a plot that would resonate with the greatest number of demographics. Given the fact that “Pan,” had I not had a ticket, would have played to any empty theater, it would seem that this model yields diminishing returns more and more these days. Amen.

It’s this kind of conveyor belt-style filmmaking that makes “Pan” feel so undistinguished. Blackbeard is introduced – I kid you not – singing Nirvana’s “Smell Like Teen Spirit.” Later, when he tries to have Peter executed, Blackbeard leads a chorus that bellows the Ramones’ “Blitzkrieg Bop.” Those two songs occur within a space of 20 minutes, and are the only musical numbers in the entire film.

It’s almost as if after the film’s umpteenth rewrite, the producers thought to make “Pan” a punk rock jukebox musical, only to change their minds halfway through the shoot. “No one could be bothered” would make for a great tagline for this movie.

That’s a shame, because Joe Wright is certainly no director-for-hire. In the past, he has made positively exquisite period pieces like “Pride and Prejudice,” “Atonement” and “Anna Karenina,” as well as the excellent thriller “Hanna.” His talent makes it all the more baffling, then, that “Pan” is such a filmmaking nightmare.

Establishing shots are thrown out the window, as is spatial awareness. One scene that involves a meeting between Peter and the “Savages” is so inexplicably edited that it’s borderline avant-garde. Eye lines are all over the place, one character is filmed in an extreme close up, another a medium, another a wide, and the viewer is given zero understanding of where each person is in relation to the camera.

I have thus far danced around the movie’s uncomfortable racial politics. I refer to the Neverland denizens as “Natives” and “Savages” and not “Native Americans” because, well, that’s what the film decides to call them. Peter Pan’s history with Native Americans is troubled, to say the least.  From the original Barrie to the Disney animated adaptation, this story has mocked and “othered” Native Americans to a hideous degree.

This film’s misguided attempt at a solution is to cast lily-white Rooney Mara as Tiger Lily, and entirely shut out Native American actors. “Pan” makes a baffling attempt to fix its franchise’s historical racism with the complete erasure of a marginalized group, and it falls flat on its face.

The greatest evil that “Pan” commits is the way it drains the wonder from fantasy by needlessly explaining in-world phenomena. The most egregious example: Blackbeard seeks out the aforementioned Pixium because it grants immortality. The film thus gives a ham-fisted explanation for how children in Neverland do not age: the power of harvested fairy stalagmites.

Nobody needs a scientific explanation for the internal logic of a fictional universe. The appeal of fantasy lies in its vast, exotic worlds and wide-eyed sense of wonder, mystery, and awe. When everything is laid out for you, there’s nothing left to imagine.