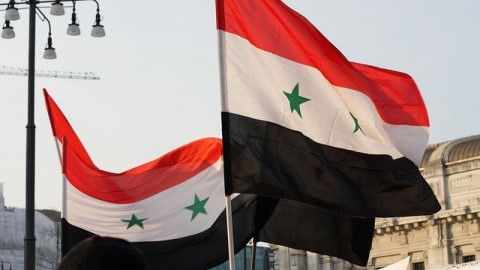 As the fighting in Syria rages towards what some have started to call a proxy war between the United States and Russia, it is beginning to be difficult to tell who is fighting for whom.

Earlier this year, the United States began an effort to train moderate rebel groups in Syria. This effort came as a response to the human rights violations cited against the Bashar al-Assad regime in Syria when it violently responded against anti-government protests, killing about 1,000. It has been widely believed that since civil war began in 2011, al-Assad’s government military has also used chemical weapons against its own people.

Russia has spent the last two weeks conducting air strikes, mostly on rebel held territory, in support of the Syrian government and the al-Assad regime. Simultaneously, Russia has claimed that its main target in the air strikes is that of ISIS.

This all creates a very confusing situation. While Russia and the United States both claim to want to destroy ISIS, Russia is fighting for the al-Assad regime to stay in power, and the United States is fighting to overthrow it. Not to mention the fact that the rebels are divided into many different groups with opposing views and there is also a large Kurdish population in the country fighting for their livelihoods and freedoms.

As an American, it is easy to see Vladimir Putin as the big bad guy dressed in red and Russia as the cold menacing threat we once became conditioned to hate during the Cold War. While it may be true that our countries have some decided differences in policy and worldview, it is actually pretty easy to see how similar the two countries are in terms of foreign policy.

On the other hand, the Russian support of Syria bears a striking resemblance to the United States’ alliance with Saudi Arabia.

While the United States looks down upon Saudi Arabia’s constant use of brutal punishment, such as the recent imprisonment and flogging of a 74-year-old British citizen for carrying homemade alcohol, the two countries still consider themselves close allies and trade partners. The United States manages to ignore certain violations of morality in order to maintain this relationship with Saudi Arabia. The two countries struck up an alliance at the end of World War II  to fight the common enemy of communism. Earlier this year, the United States assisted the Saudi military with intelligence for air strikes in neighboring Yemen. The United States and Saudi Arabia are nothing short of comfy and close allies.

Russia has long had a similar situation with Syria. Ever since 1946, Syria and Russia have been allies both militarily and economically. For years, Russia has had strong trade ties with Syria, as well. While it is easy to look down upon Russia for supporting the al-Assad regime, and it’s brutal ways, it is just as easy to hate the United States for so openly supporting Saudi Arabia amongst all of it’s human rights violations.

It’s easy to pick the side of the country you live in, and it might even make the most sense. Who knows whether a prevailing ideology will ever surface and bring the cold tension between the United States and Russia to a warm simmer. Maybe a common enemy will do the trick; it has always seemed to in the past. Whatever the case, the United States and Russia are incredibly similar world super powers – their difference mainly lying in their position along the web of alliances strewn about over the years, and how to navigate that web without tearing the whole thing down. Syria marks an interesting kink in the web and only time will tell where it will take the United States and Russia, along with much of the rest of the world.