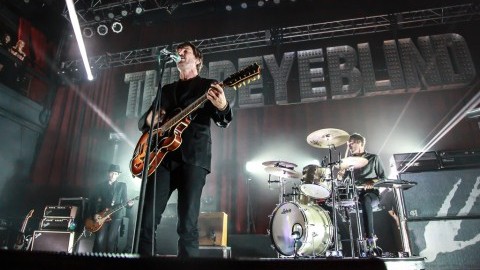 The immensely successful rock band Third Eye Blind will take its numerous, beloved hits to the Calvin Theatre in Northampton Monday. The band is touring in support of its new album, “Dopamine,” which was released in June.

Third Eye Blind has crafted its legacy for almost 20 years, starting in the late 1990s. The band was formed in San Francisco in 1993 by lead singer Stephan Jenkins, and the band’s former guitarist, Kevin Cadogan. Its first big break though, came in 1997 with the release of the classic hit single “Semi-Charmed Life,” which landed them a spot in the top five of the Billboard Hot 100, and even earned them a Billboard Music Award.

Although the band has achieved a great deal of success over the years, the camaraderie of its band members has fluctuated throughout the years, as Jenkins has been the only consistent member.

Yet even with the shifting lineups, and a few bumps in the road, Third Eye Blind has managed to maintain its unique style and sound. During the late ‘90s, the band channeled a more upbeat style of rock that stood in stark contrast to the angst-driven lyrics and harsher tones popular with other bands from the period.

A few of Third Eye Blind’s songs in particular are still extremely popular today. Singles such as “Never Let You Go,” “How’s it Going to Be” and “Jumper” are still frequently played on pop radio.

The band’s release of albums has been unpredictable over its two-decade career. After its initial success in 1997, Third Eye Blind took a break from recording and playing live – with the exception of charity events – from 2000 to 2002. Similarly, the band did not release a new full-length album between 2003 and 2009 as Jenkins was battling severe writer’s block during that time.

But as 2014 rolled around, after another half-decade lapse between albums, rumors about the release of a new album began to circulate. On June 16, those rumors became reality when the band dropped their latest record, “Dopamine.”

The 12 tracks on “Dopamine” are familiar, yet show a definite change in style. Their new tone is more relaxed than their previous recordings, and it sounds as if the band is trying to appeal to an older crowd, with a more U2-esque soft rock style. While the lead single, “Everything is Easy,” is probably the most upbeat song on the record, it is hard to be turned off by this easier-going incarnation of Third Eye Blind.

“Dopamine” still manages to capture the essence of Third Eye Blind, just an older, more laid back version of the band.

It is likely that Third Eye Blind will play many of its classics while on tour, as well as preview its new album to the audience.

The show is at 8 p.m, and Iamdynamite will open the proceedings. Tickets are $31, and can be purchased on the Iron Horse Entertainment Group website.