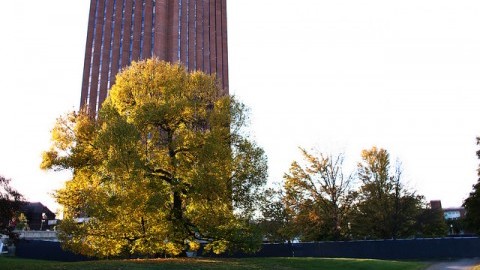 The University of Massachusetts celebrated the planned construction of the $52 million Design Building on Friday at a ceremonial groundbreaking. The ceremony honored the state-of-the-art academic facility and the innovative wood construction technologies it will incorporate.

“It’s bold, beautiful, and brilliant,” said Subbaswamy of the building, which he said will be “the most advanced wood structure in the United States” once completed, yielding zero carbon emissions.

Construction of the Design Building began in the spring and is expected to be finished in 2017.

It will occupy parts of parking lot 62, which is next to the Studio Arts Building.

“It’s going to be a very exciting new building,” UMass Project Manager Burt Ewart told the Daily Collegian in the spring. “It’s being designed as a modern showcase of timber technology.”

The “super sustainable” four-story structure will feature wood frame construction rather than common steel and concrete construction types. It will be built with recyclable and renewable materials and will utilize high-tech wood technologies made possible by the Environmental Bond Bill passed by the Massachusetts state legislature in 2014.

“We have old timber buildings but they’re ancient,” said Ewart. “Technology has changed a lot,”

A “green roof” outdoor courtyard and garden on the third floor will help maintain moisture and prevent storm-water runoff, keeping the building cooler and reducing the need for air-conditioning.

Other sustainable features include low-flow water fixtures, light sensors and energy-efficient heating and ventilation systems. Space will be left on the roof for the possible installation of solar panels.

It is intended that the finished building will reveal different components of the building’s mechanical, electrical and plumbing systems for teaching purposes.

The groundbreaking ceremony included a wooden structural beam to be used in the Design Building that was available for attendees to sign their names on.

Story praised former Congressman John Olver, who attended the event but did not speak. She said in her speech that he insisted the building use a wooden rather than steel structure, which he was able to support by securing $3 million in funding.

Meehan also praised Olver for his collaboration involved with the building, pointing out that the building requires borrowing money that must be repaid.

“Excellence costs money. I will never compromise when it comes to excellence,” he said.

The project is being financed through the UMass Building Authority, which hired Boston-based Leers Weinzapfel Associates to design the building.