UMass field hockey excited to take on No. 2 Connecticut 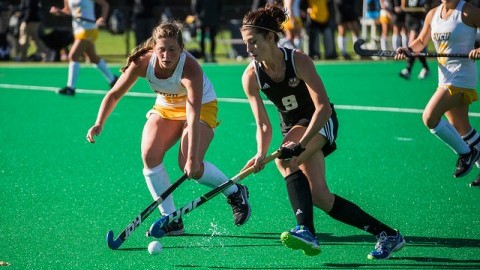 The Massachusetts field hockey team has nothing to lose and everything to gain Wednesday as it faces off against No. 2 Connecticut on the road.

UConn (17-0, 4-0 Big East) has not lost a game this season – only three of those games were decided by one-goal – and provides UMass with a challenge that will benefit its postseason aspirations.

The Huskies have played several of the same teams that the Minutewomen (8-8, 4-3 Atlantic 10 Conference) competed against in their non-conference schedule, including New Hampshire, Northeastern, Boston College, Boston University and Stanford. UConn has beaten all of these teams,  while UMass had victories against the Terriers and the Huskies, both of which ended in a 2-1 win.

UConn has an explosive offensive unit, which over the last nine games has averaged 6.33 goals per game, just a tad higher than its 6.12 goals-per-game total this season. Forward Charlotte Veitner is the Huskies biggest challenge for the UMass defense as she leads the Big East in points (77), goals (30) and assists (17).

To put those statistics into context, the next highest scorer in the Big East is teammate Roisin Upton with 34 points.

UMass coach Carla Tagliente recognizes the pressure that Veitner, along with Upton, Anna Middendorf and Casey Umstead, will put upon the Minutewomen defense and has changed her defensive strategy to contain UConn’s offensive stars.

“We are changing a few things, making a few adjustments, but I think the biggest thing with them is that they just are able to execute well in the circle. They have scored a lot of goals and have talented players that can finish,” Tagliente said.

UMass goalkeeper Sam Carlino has not received much action in goal over the past few games as she has only allowed four goals in the last four games.

Tagliente believes that Carlino is ready for the task of slowing down UConn and recognizes that penalty corners will make or break the game.

“Sam obviously needs to step up big and make some savable saves. She’s usually good to step up in big games like this … the biggest thing we need to do is limit penalty corners because they are very good at those,” Tagliente said.

Playing against one of the top undefeated teams in the nation can induce numerous emotions, but for Tagliente and the Minutewomen, they have said they are not intimidated or worried about the contest. Instead, they are more focused on how their fate in the conference turns out.

“The team is pretty excited to play them, not to overlook them, but they are pretty focused on what they need to do in conference play. This is a bonus, a non-conference game, where there is no pressure,” Tagliente said.

Tagliente added: “All the pressure is on UConn. If we win, we look like heroes.”

The Minutewomen benefit from having a former member of the Huskies on their coaching staff. Assistant coach Sarah Mansfield graduated from UConn in 2014 and according to Tagliente has assisted the Minutewomen with insight on how the Huskies play. But because UMass frequently plays UConn, the Minutewomen have already had a lot of exposure to Wednesday’s opponents.

“I don’t think they changed a lot since Sarah has left the program … Sarah really kind of justifies what we are already thinking since we are quite familiar with them,” Tagliente said.

Tagliente recognizes that the victory would do a lot for the confidence of the team, but considers Friday’s contest against Davidson as the one that really matters.

“Davidson is more important, we are not playing to not play people per say, but UConn is not that important of a game that we press our team to the max. We need to think longer term and what’s in our best interest,” Tagliente said.

“We usually sub liberally, we’ll continue to sub pretty deep in to our bench on Wednesday.”