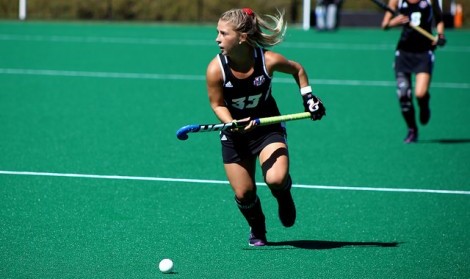 After back-to-back tough home losses to No. 9 Stanford and conference rival Richmond, the Massachusetts field hockey team aims to have its offense take charge and pave the way to victory this weekend, starting Friday against Atlantic 10 opponent Saint Louis.

“We’ve got a big, scrappy game this weekend and our goal is to get the win,” UMass junior defenseman Hannah Farrell said. “We’re working on getting more shots in game, we’re not all that dangerous in the circle or the last 25.

She added: “Our attack is doing well, we are able to create a lot of good plays, but we just have to finish by getting shots on goal.”

In its last two contests, the Minutewomen (5-4) have struggled to put shots in or around the net. In its game against the Cardinal (7-3) last Sunday, UMass only mustered five shots and just five penalty corners.

“The offense is struggling on a game-by-game basis,” Minutewomen coach Carla Tagliente said. “We’re great at creating opportunities for our forwards, but we’re just struggling to get shots off and pulling the trigger.

“We’re looking to get our midfielders involved in the offense as well. We’re improving game by game and our team is in a good place. You’ll see a bigger and better performance from us this Friday.”

UMass plans to depend on a diverse offense, relying on many midfielders and forwards for goals. Izzie Delario, Melanie Kreusch, Sarah Hawkshaw and Nicole Miller head this attack.

Delario leads the team in points (12) and assists (eight) while Kreusch holds the most shots (21) and is tied with Hawkshaw for most goals (five).  Miller is right behind them, with four goals of her own.

The Minutewomen’s offense will look to complement the defense, which has been solid for UMass throughout the first half of the season. Minutewomen goalkeeper and senior captain Sam Carlino provides the foundation on the defensive end and kept the team in a close fight against Stanford, tallying nine saves.

Saint Louis heads into Friday’s matchup at 0-11 with only seven combined goals for the season so far. Farrell admitted that UMass is confident heading into their third A-10 matchup of the season.

“We feel confident going into the weekend,” she said. “We never underestimate anyone. These games are opportunities to practice what we need to work on, and we just want to finish and make good plays.

“We have a lot of strong leadership, so many of these girls have stepped up this year,” Farrell added.

Farrell acknowledged the senior leadership of Allie Sabia and Carlino, as well as rising talents Hawkshaw and Nicole Kuerzi, who have provided great depth to the Minutewomen roster.

“We’re focused on ourselves as a team,” Tagliente said. “We played well against Stanford, they just outshot us.  We’re really coming together nicely as a unit, and are improving each and every game.”

Faceoff is set for 3 p.m. Friday afternoon in Saint Louis.

Collin Wiedersheim can be reached at [email protected]