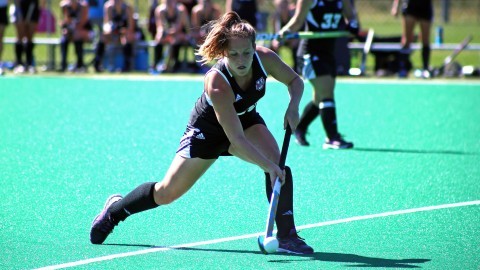 The wind was whistling in Amherst Friday afternoon when the Massachusetts field hockey team took the field against conference rival La Salle. But the frigid temperature couldn’t slow down the red hot UMass offense, as it shut out the Explorers 5-0.

Right out of the gates the Minutewomen (8-8, 4-3 Atlantic 10) controlled the pace of the game by out-muscling the Explorers. A couple early opportunities passed by UMass but in the third minute Cliodhna Loughlin put the Minutewomen on the board. Standout junior Izzie Delario passed off a penalty corner and Loughlin riffled a shot passed the Explorers goalkeeper for a 1-0 advantage, a lead that would not be relinquished.

“I felt (the early goal) took the weight off of them,” coach Carla Tagliente said. “We were less tense and less seized up, we were expecting it to happen sooner but when we got it the game opened up for us.”

The rout was on in the first half. After 15 minutes of scoreless play, UMass doubled its lead thanks to Sarah Hawkshaw. Her nifty ball handling gave her enough space to knock a reverse shot into the back of the net. A little more than three minutes later, Delario tallied her fourth goal of the season.

In the 28th minute, Anne Dijkstra joined the goal parade with her third of the year. Dijkstra found the ball on her stick after a pile up near the goal. She wouldn’t miss her chance as she knocked in the rebound into the back of the net to increase the Minutewomen lead to 4-0.

The balanced attack continued throughout the first half. Delario tallied her second goal and the Minutewomen’s final goal in the 32nd minute of the first half. The Minutewomen had a counter attack with Nicole Kuerzi leading the charge. With one defender to beat, Kuerzi found Delario who notched her fifth of the season.

“We’ve got a lot of talent on the ball and off the ball as far as movement goes,” Delario said. “I think everything is just starting to come together and really finding a tempo between each other.”

The second half was a completely different story. The Minutewomen came out struggling to maintain any consistency on offense. But with a 5-0 lead to work with, UMass held on.

“It looked like they were off their game a little and fatigued,” Tagliente said. “I would chalk that up to where we are at in the school year and they have looked tired and sluggish in practice.”

However, senior captain Sam Carlino kept La Salle’s offense at bay and recorded her second shutout of the season in goal. The Minutewomen’s defense was once again a bright spot for UMass with Carlino and Loughlin, a defender, leading the charge.

“I though Cliodhna had an outstanding game in the back,” Tagliente said. “It was the best game I’ve seen her play.”

Despite the 5-0 score, Tagliente thought it was not the cleanest game she has seen from UMass this season.

“I don’t think it was a clean game for us and that we played all that great,” Tagliente said. “I was expecting more in the second half.”

With two games remaining in the regular season, the Minutewomen face tough opponents in Connecticut and conference rival Davidson. However, Delario has plenty of confidence heading into the last week of the regular season in the middle of a playoff push.

“I think we just need to have confidence in one another,” Delario said. “I have no doubt in my team, we have talent and grit and passion that if we play our game the outcome will come in itself.”

Tyler Fiedler can be reached at [email protected] and on Twitter @Tyler_Fiedler.