UMass field hockey’s Senior Day dampened by loss to BC 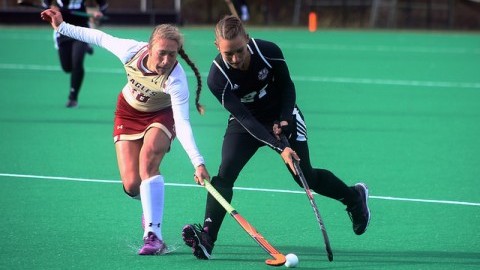 On a day when the Massachusetts field hockey team’s two seniors were honored for Senior Day, a crowd of 537 fans packed a chilly Gladchuck Sports Complex and watched as UMass came up just short in a matchup against in-state rival Boston College.

The biggest swing of momentum came with less than a second before halftime as Boston College was rewarded a corner shot, which Eryn McCoy scored on as time expired to give the Eagles a 2-1 lead.

The goal gave BC the permanent lead, and it was one of McCoy’s three tallies on the day.

Much like its bouts against other nationally-ranked opponents this season, UMass played some of its best field hockey and had the Eagles on their heels on multiple occasions.

The Minutewomen struck first with an early goal less than two minutes into the game. Following a blocked shot from Sarah Hawkshaw, UMass’ Nicole Miller put the ball right over BC goalkeeper Leah Settipane’s head to give the Minutewomen a 1-0 lead.

“It is the same story we’ve had for a few top-15 and top-10 teams, we just need to close it out and get through the hurdle and finish the game,” UMass coach Carla Tagliente said.

After falling behind 3-1 in the 42nd minute, UMass began to stage its comeback attempt when Nicole Kuerzi cut across the front of the net and crossed up Settipane for her third goal of the season.

That was the closest the Minutewomen would get. After pulling goalie Sam Carlino for an extra attacker with a minute remaining, UMass was on the verge of receiving a corner shot but couldn’t get the call in time. This was the first time all season that Tagliente decided to pull her goalie from the game.

Aside from adding an extra attacker, Tagliente hoped the move would cause BC to slip up mentally.

“Sometimes psychologically it even helps because the other team is focused so much on an empty goal that they might do something dumb,” Tagliente said.

Overall, Tagliente said she was pleased with the Minutewomen’s late-game efforts.

“To come out of it close to having a penalty corner, that’s a pretty good run in a minute,” Tagliente said.

Prior to game time, the Minutewomen celebrated their annual Senior Day honoring Carlino and midfielder/defenseman Allie Sabia. Each was escorted by their parents through an aisle of their teammates and were presented with a bouquet of flowers.

“It’s extremely bittersweet, it is coming to an end,” Sabia said. “I’ve been doing this for four years and I’m really glad to say I’ve been doing it for this long.”

Sabia has been a rock on the defensive side of the ball her entire career and has started 36 games in a row.

Carlino has been a mainstay in goal since she first arrived in 2012. In the 83 games that the Minutewomen have played in that span, Carlino has protected the net in all of them.

Unlike Sabia, Senior Day didn’t take Carlino by much surprise.

“Not really, we’re playing against BC one of our in-state rivals, we still have three games left and hopefully more than that,” Carlino said. “It’s just another game for me.”

After the loss, Carlino said UMass “needs to take that one extra push and one extra step to put it away.”

UMass currently sits in sixth place in the A-10 standings and needs to finish in the top four for a tournament berth.

Friday’s home game against La Salle will prove to be a pivotal matchup, as the Explorers are ranked one spot ahead of the Minutewomen. The game is set to start at 3 p.m. at Gladchuck Field.