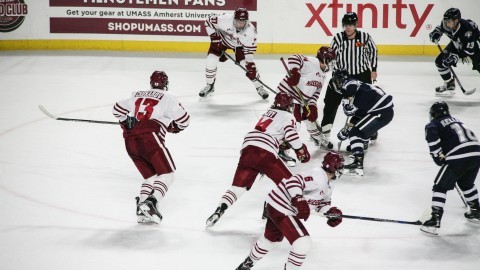 Friday night’s game at the Mullins Center appeared to resemble any other blowout loss for the Massachusetts hockey team. Defense was subpar, goaltending was leaky and at 14 minutes, 55 seconds of the second period, New Hampshire held a 6-1 lead.

But then, somehow, it wasn’t just another blowout loss. Five unanswered goals tied the game at 6-6, and after a scoreless overtime, the Minutemen earned a seemingly impossible 6-6 tie against the Wildcats in their Hockey East opener.

“I like our team a lot,” UMass (3-0-1, 0-0-1 Hockey East) coach John Micheletto said after the game. “I like the makeup of it, I like our approach, I like our focus, I like our resolve. I think a lot of those things were on display for the better portion of the night.”

“That was obviously poor play on our part,” UNH (1-2-1, 0-0-1 Hockey East) coach Dick Umile said. “You have to give them credit for coming back. (It was) disappointing on our part how we handled the third period.”

The comeback featured contributions from all across the UMass lineup, and it seemed like everyone had a part to play. Ray Pigozzi scored to make it 6-2 with under four minutes to play in the second, a goal that seemed inconsequential at the time, but would prove to be the opening of the floodgates for UMass.

The third period, all things considered, was stunning. Anthony Petrella drove hard to the net and scored to make it 6-3 just three minutes into the final frame. What followed were two power plays for UNH that could have put the game out of reach, but the Minutemen killed both of them off. It was still 6-3, but the Wildcats would look back on the power play chances as enormous missed opportunities.

Just over a minute after the last penalty expired, Dennis Kravchenko flew down the ice and roofed a wrist shot to make it a two-goal game. Suddenly, with 11:54 to play, it was a game again, and confidence was flowing on the UMass bench.

“After that goal it was one of those things where we were like ‘We’re going to get it,’” Minutemen forward Dominic Trento said. “You could just feel momentum had a white jersey on today.”

Shane Walsh scored on the power play to make it 6-5 just three minutes later and the Mullins Center erupted. The Minutemen went on the power play again after a too many men on the ice call against the Wildcats, and 30 seconds into the man advantage, Trento tipped home a blast from Maddison Smiley to tie the game.

“All week in practice we stick around after and actually work on that exact thing, the backhand side and him just ripping the puck,” Trento said. “I saw him take the first shot and he missed a little bit, and I knew it was coming again because we talked about how he’s going to rip it.”

There were chances to win the game for both sides in the final minutes and overtime period, but 12 goals was the limit for the game. The ensuing tie was a classic case of a draw that felt like a win for one side and a devastating loss for the other. Both Trento and relief goaltender Nic Renyard said the tie felt better than some wins they have experienced.

The Wildcats built a 6-1 lead behind a dynamic night offensively from some of their top players. Tyler Kelleher had four assists, Dan Correale scored a hat trick and Andrew Poturalski scored and added three assists for UNH. They were dynamic offensively for the first period and a half, and it certainly appeared the onslaught would continue into the third.

But after a Chris Miller snipe made it 6-1, Micheletto called timeout and changed goaltenders. Renyard played well in relief of starter Henry Dill, but what mattered more was the defense in front of him. The Minutemen regrouped during the timeout and played with more focus in the defensive end in the final period, shutting down the Wildcats quick transition attack.

The tie moved UMass to 3-0-1 on the season, its best start since 2009. The Minutemen will return to action a week from Friday at the Capital City Classic in Trenton, New Jersey, where they’ll face Maine.