UMass hockey eases into season with exhibition against Dalhousie 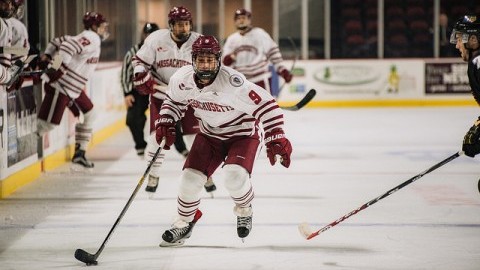 The Massachusetts hockey team beat Dalhousie 4-0 Saturday night at the Mullins Center in the Minutemen’s season-opening exhibition game, but the final score was not of any interest to UMass coach John Micheletto.

“We scored some goals, kept some goals out. (Nobody) got seriously injured and everyone that was healthy got to play,” Micheletto said. “I guess we checked all the boxes that an exhibition game has got to check.”

Saturday’s game was a one-sided affair, at least on the scoreboard. The Minutemen received strong offensive performances from freshmen Austin Plevy, Ivan Chukarov and Callum Fryer, and a combined shutout from goaltenders Nic Renyard, Henry Dill and Alex Wakaluk.

But as to be expected in the preseason, there was some sloppiness from both teams.

Plevy finished an opportunity on an odd-man rush at eight minutes, 29 seconds into the first period, with assists from Chukarov and senior captain Steven Iacobellis to take the 1-0 lead. Renyard followed with several strong saves to keep the Tigers off the board in the first period, including stopping two breakaways UMass allowed.

In the second period, Iacobellis doubled the Minutemen’s lead after slapping home a rebound in front, and minutes later Plevy found Keith Burchett open alone by the Dalhousie net to make it 3-0.

In the final frame, the tempo and energy of the exhibition was noticeably down though. Wakaluk faced a barrage of quality scoring chances from the Tigers, but preserved the shutout with 11 saves. Freshman Ryan Badger added a goal at 12:59 into the third period to take a 4-0 lead.

UMass will open its regular season Friday night at Colorado College at 9:37 p.m.

While the final score may not be of the utmost importance, Saturday’s exhibition did offer a chance to get a first glimpse at the incoming freshmen on the roster for the Minutemen.

And for Chukarov, Fyer and Plevy, the first impressions were encouraging.

A 6-foot-3 seventh round NHL pick of the Buffalo Sabres, Chukarov assisted on two goals, including the primary helper on Plevy’s first period score. Fryer (also 6-foot-3) recorded two assists as well, and together the two used their size and range to form an effective defensive pair.

Plevy, a freshman from Langley, British Columbia, was the star of the night offensively. His first period strike was slotted neatly into the top right corner of the net. In the second period, he showed good awareness to find Burchett near the Dalhousie net. Plevy delivered a perfect pass that Burchett slammed into the open goal. He spent most of the night skating as a wing on a first line centered by Iacobellis and featuring senior Shane Walsh on the other wing.

Saturday was a strong showing from all three UMass goaltenders, who probably handled more action than Micheletto would have liked.

Renyard, a freshman from Victoria, British Columbia, started the game and made eight saves in the first period, including a pair of stops on clean breakaways for the Tigers that happened just minutes apart.

“It was a little bit of a jump from the Alberta League to the college level but I thought our guys made it really easy for me out there,” Renyard said. “(The defense) cleared the rebounds and played real well defensively to make it easy for me.”

Dill, a sophomore who split time with Steve Mastalerz last season, came in for the second period and made 14 saves of his own, including another breakaway stop. In the final frame, Wakaluk made several big-time stops on high-quality scoring chances.

After the game, Micheletto said he will make a decision on Thursday on who will start in net for the opener against Colorado College.

He said that while Baxandall sustained his injury more recently than Kravchenko, both were considered day-to-day and neither injury was considered long-term. They both could play at Colorado College if they progress this week, according to Micheletto.

Kravchenko is the top returning offensive producer for the Minutemen. He scored 10 goals and assisted on 23 more last season as a freshman. With the departures of leading goal scorer Frank Vatrano and Anaheim Ducks second draft pick Brandon Montour, Kravchenko figures to be heavily relied upon to be an offensive spark for UMass.