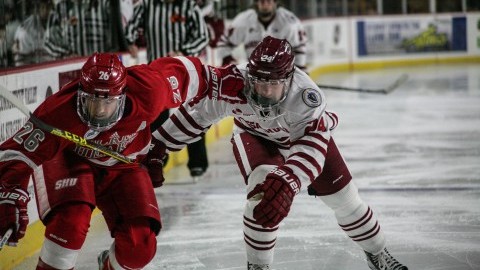 Those were the words Massachusetts hockey player Dennis Kravchenko bluntly said in the postgame press conference after the Minutemen’s latest victory, a 5-2 triumph over Sacred Heart Friday night.

For Kravchenko and the rest of UMass (3-0), winning has come often early in the season, as the Minutemen used a three-goal third period to defeat the Pioneers (0-1-1) Friday and open the season with three consecutive wins.

Kravchenko, a sophomore, recorded three goals and an assist in UMass’ home opener, just one week after freshman Austin Plevy tallied a hat trick of his own against Colorado College.

Heading into the third period tied at two apiece, Kravchenko scored his second goal of the game, firing a slap shot past Sacred Heart goaltender Brett Magnus to regain the lead for the Minutemen with six minutes, 52 seconds remaining.

“(Ray) Pigozzi made a good chip down low, Dom (Trento) got in there really hard just like our forecheck is, he made a great behind-the-back pass and I just did what I had to do,” Kravchenko said. “It was a good shot and went in.”

A goal from Dominic Trento and Kravchenko’s third of the game – on an empty netter – secured the victory for UMass, which has now outscored opponents 9-to-2 in the final period.

Following a year when the third period was not kind to the Minutemen, this year has brought a welcomed change.

“Our guys are just bringing it together,” Kravchenko said. “We’re not getting to ahead of ourselves, we’re just staying calm and doing what we have to do. Sometimes we’re down or sometimes we’re up, we just stick to the game plan and make sure we do the right things and hopefully get a win.”

UMass coach John Micheletto acknowledged his team’s ability to keep finding ways to win games, as well as the resilience they continue to show.

“I think we’ve seen out of this group in the early going the resilience and belief in each other,” he said. “We keep using our voices which is really powerful for us to generate energy and effort and execution and obviously then our skills are put on display when those things happen and that’s what happened in the third period.”

Despite allowing the opening goal in the first period, Micheletto said he didn’t think it served as a wake-up call to his team, although it appeared some adjusting needed to be done with less time and space after playing on a bigger sheet of ice in Colorado.

“I don’t think we needed to be woken up,” he said. “We saw the tape and we saw the fact that they jumped Union pretty good in their building last week. I think there was a little adjustment period as much as we talk about it.”

The line of Trento, Kravchenko and Plevy combined for four goals and four assists Friday, as the trio continues to perform at a high level.

In Trento’s eyes, the in-game success has been a result of what happens off the ice.

“I know me, Dennis and Austin are good friends off the ice as well and I think that has a lot to do with it,” he said. “I think this team is clicking really well in the sense that we’re really close. As far as the three of us go, the chemistry between the three of us is pretty electric.”

While Trento acknowledged the excitement that has come with the team’s early success, he recognized the necessity to stay focused, especially with Hockey East play beginning next Friday against the University of New Hampshire.

“We’re not going to let it get to our heads too much,” Trento said. “It’s definitely one of the best leagues in the country so you can’t really let it get to you. It definitely gives us confidence going into Hockey East play.”

Last Friday night, Micheletto used the instructions on the back of a shampoo bottle to send a message to his team after UMass’ 6-3 victory: “lather, rinse, repeat.”

“We keep having that mentality that regardless of whether we win or lose, that you get up the next day and walk away from what happened the night before and move forward to what’s next,” he said. “We’re going to derive a lot of confidence from the good things we do and the record that we have as we move forward. We certainly know the big boy league starts January.”