UMass loads up for shootout versus Bowling Green 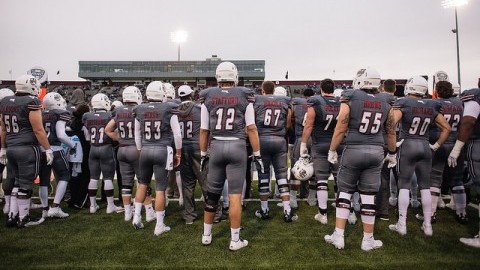 If you like offense, then Doyt Perry Stadium is the place to be this weekend.

Last season, the Massachusetts football team and Bowling Green combined for 89 points and 1,306 yards of total offense in what turned out to be a good old-fashioned, Big 12-esque shootout that didn’t feature much defense.

UMass (1-3) won’t have much time to get acclimated to the Mid American Conference style of play when it travels to Ohio to face the conference’s top offense.

Quarterback Matt Johnson orchestrates the Bowling Green offense and has emerged as the early favorite for MAC player of the year. Johnson leads the conference in completions (157), attempts (236), passing yards (2,084), touchdowns (14) and quarterback rating (156.8).

“They’re so smart,” linebacker Jovan Santos-Knox said. “They move the ball so methodically down the field. It’s slow, but it’s effective. They nickel and dime you and that’s why (Johnson) is so good. We need to get him off tempo, get off the field on third downs and hold them to field goals.

The Falcons offensive success runs primarily on short, quick passes using slant and hitch routes to move slowly up the field. They average a total of 85.4 plays per game and utilize a series of different receivers as they have four players with over 280 receiving yards on the season.

Lewis is Johnson’s go-to target as Lewis is the only player in the conference with more receptions and receiving yards than UMass’ Tajae Sharpe. Lewis has six touchdowns on 40 receptions this year and his 760 receiving yards is the most in all of college football.

“(Johnson’s) a good quarterback and he has great receivers. We just have to hold them and keep everything in front of us and not give up as many big plays as they’ve gotten this year,” cornerback Trey Dudley-Giles said.

“We have to put them in third and longs,” Dudley Giles added about stopping Johnson. “We can’t give them third and shorts because they hit the quick hitches. We have to stay on top of our receivers; we can’t let him chuck it down the field.”

Offensively, the focus of the week has been on converting on chances in the red zone as the Minutemen are converting points at a rate of 64 percent. Last weekend against Florida International, UMass was stuffed on six consecutives plays from inside the three-yard line before having a 19-yard field goal attempt blocked.

Blake Frohnapfel, who broke the school record for passing yards against the Falcons last season with 589, has missed tight end Rodney Mills in the red zone, who has missed the past two games with an undisclosed injury.

“They have a very explosive offense that scores a lot of points. Getting down to the 20s is a science and getting into the end zone within the 20s is an art. The windows are smaller and you have to be tougher,” Frohnapfel said.

Bowling Green has won 13 consecutive games against MAC East opponents and Santos-Knox has made it a constant message this week to not be the 14th victim.

“They’re the defending MAC East champions. To be the best you have to beat the best,” he said. “This is a great test for our team to see where we are mentally, physically, all that stuff. I think we’re going to be ready for this occasion.”