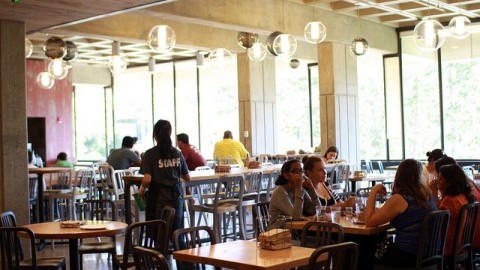 The University is one of the first colleges and the largest university food service program in the country to take this pledge, which is a result of a 4,000-student survey completed in April. The survey revealed that about 75 percent of students who responded believe humanely raised food is most important when it comes to food sourcing.

“Some schools have 80 percent or 50 percent (antibiotic free chicken), but we pride ourselves on being 100 percent,” executive director of Auxiliary Enterprises Ken Toong said. “We feel that we need to raise the bar.”

According to Toong, chicken is the most consumed protein at UMass. He said over $2 million a year is spent on chicken alone and about 750,000 pounds are consumed annually across all campus dining locations.

At Hampshire Dining Commons, 200 full birds are consumed each week, according to Christopher Howland, director of purchasing and marketing for Auxiliary Enterprises.

Four suppliers, including Perdue and NatureRaised Farms, part of the Tyson Foods family, currently provide chicken for UMass. Howland said UMass Dining encourages food providers to evolve with the University, saying, “Basically, you’re either going to change with us or we’re going to find a different supplier.”

Garett DiStefano, director of residential dining, said purchasing antibiotic free chicken has not had a major impact on the $25 million food purchasing budget for fiscal year 2015.

“We are in line with our overall food costs of last year and actually a little bit below,” he said.

The antibiotic free chicken costs about 60 cents more per pound, Toong said, though according to Howland, menu engineering and cutting down on food waste help to keep costs down.

Howland added that dining services have instituted random chicken pieces to reduce costs, meaning chicken received from suppliers is not always a uniform size, with some pieces coming in larger than others.

DiStefano said the consumption of chicken has increased since the switch and initial results indicate a positive response.

“I definitely like that,” Henry Noke, a freshman in the Isenberg School of Management, said of the switch. “I don’t necessarily know the danger of antibiotics, but if we can avoid them I say why not.”

Cydne Apperwhite, a senior psychology major, agreed, saying, “I think it’s really good… I learned about it in my nutrition class.”

DiStefano said UMass Dining Services is always open to suggestions and keeping an open relationship with students to continue to improve the dining program and make it the best in the nation. UMass Dining believes educating students about where their food comes is especially important.

“We have a responsibility to ourselves and the student body. We say we don’t just serve food, we serve an experience…and part of that experience is education,” Howland said.

Toong hopes that universities across the country will follow UMass’ lead by also switching to serving antibiotic free chicken and that the University will be able to share what it has learned in the process with other schools.

Howland agreed, saying UMass wants “to be the catalyst for this kind of thing.”

UMass has had success with similar initiatives in the past, including serving cage-free eggs, grass-fed beef and sustainable seafood.

UMass Dining serves 45,000 meals per day and roughly six million meals per year. The program has more than 19,000 people on a meal plan, including 1,200 faculty and staff and 5,000 off-campus students, who dine at four residential dining commons and over 30 retail dining locations.

“Ultimately, we are changing the food chain because students want to know where the food comes from…and I think that’s why we’re so proud of UMass Dining,” Toong said.