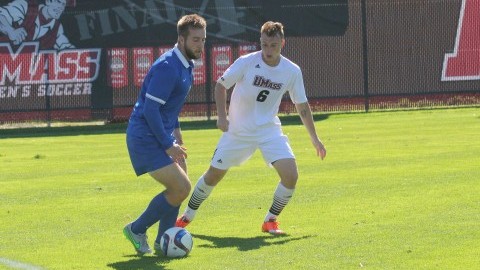 The ball was in the back of the net.

Massachusetts soccer player Will Ellis sent a corner into the box and forward Lenny Sery headed it past Saint Louis goalkeeper Sascha Otte and into the net for the 1-0 lead.

But it didn’t count.

Just as Sery got his head on the ball, the time had expired in the first half, and the referee disallowed the goal.

While some draws may feel like losses, Saturday was one that left coach Fran O’Leary delighted.

“Very pleased with the performance (Saturday), I thought the guys were terrific,” he said.  “A clean sheet against a top team like Saint Louis is very good. More impressively was I think we took the game to them for large phases of the game. We stood up well against a very good team.”

It was the back line that stepped up in crunch time for UMass, including junior Josh Jess, who played arguably his best game of the season, cutting down many chances that were created by Saint Louis.

It was the Minutemen’s first clean sheet of the season.

“I thought it was absolutely fantastic,” Jess said. “One of the best teams we’ll probably have to face. Three years now we’ve lost to them every time and to get a huge result against them at home, especially on Sam (Koch)’s memorial day, it was such a great feeling.”

“(Josh) was very good, he just stepped in and made a lot of key interceptions,” O’Leary added. “Him and Brandon (Merklin) have a nice little partnership going now.”

Throughout the contest, the Minutemen constantly put the Billikens’ defense under pressure, specifically freshman Samuel Asamoah and senior Mark Morris.

According to O’Leary, it wasn’t just these two making all of the difference.

“(Sam) and (Mark) were fantastic, but so was everyone else today,” he said. “Some guys played 110 minutes today and we’ve now played against Rhode Island and Saint Louis, two of the top teams in the conference, and we’ve stood toe-to-toe with both of them.”

With a week off until UMass heads to New York to take on St. Bonaventure, both O’Leary said the overtime draw would stand as a good confidence booster, acknowledging the necessity to continue to replicate these performances on the road.

“It gives us a point, which is very important, and it denies them a couple of points, so that’s important in the league,” O’Leary said. “It’s four points out of six against two of the top teams in the conference. We’ve gotta back up today and the Rhode Island game with a good performance at St. Bonaventure.”

Before Saturday’s game, a ceremony was held to dedicate the Sam Koch Memorial at Rudd Field.

Many former players and friends were in attendance for the ceremony, with some sporting maroon shirts that read “Koch” on the back.

The longtime coach for the Minutemen, who is known to have saved the program and took UMass to the semifinals of the College Cup in 2007, passed away on July 21, 2014 after a battle with sinus cancer.

For Jess, this was a game that would’ve made his former coach proud.

“For most of us who were recruited by Sam and for some of us who were only here for a year before he passed away, the way he was as a person just touched everyone,” he said. “It was emotional before the game obviously seeing the family out there, but I definitely think it got us going through the tough parts of the game.”