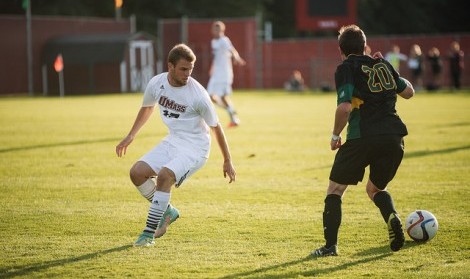 Often in college athletics, the start of conference play signifies a fresh start for teams that did not fare well in the non-conference portion of their schedules.

For the Massachusetts men’s soccer team, which has lost nine of its 10 non-conference matchups so far, Saturday night’s conference opener against Saint Joseph’s presents just that: a fresh start.

“Well, we’re 0-0 in the conference,” UMass coach Fran O’Leary said when asked about the mindset of the team heading into Atlantic 10 play.

“We played a very tough non-conference schedule and haven’t gotten the results maybe our performances deserved at times,” he added.

The Minutemen (1-9) will head to Philadelphia, Pennsylvania to face off against the Hawks (2-7), who have also struggled this year and are coming into this one following a 3-0 loss to the University of Pennsylvania.

“If we can kick off with a win, we’re sitting (at the) top of the conference come Saturday night,” he said. “I think the guys know it’s a big game and we’ve got to prove that we can go on the road and put in the type of performance that we’ve consistently put in at home.”

As he has said in the past, O’Leary mentioned his team’s ability to get “first contact” in the penalty areas as one of the main things to look for this weekend.

“A lot of stuff goes on between the 18s, but the vast majority of goals are scored inside the penalty area and it’s usually the team that gets the first contact on the ball,” he said.

Last year, UMass was defeated 1-0 by Saint Joe’s at Rudd Field on a cold, rainy day in the 86th minute on a goal by Mark Colville.

Despite this defeat, O’Leary said there hasn’t been much talk about this being a “revenge game.”

“I haven’t heard anything,” he said. “I just know that the guys understand the importance of it and the intensity level we’ll need to bring.

“The older guys, the guys that have been around the block here, will know that the intensity and commitment levels are ratcheted up a notch or two come conference time, so we just have to make sure our first-years are ready for that type of intensity.”

Although the Minutemen yielded negative results so far this season, O’Leary believes playing non-conference opponents such as Boston University (4-2-1), University of Vermont (5-3-1) and Utah Valley (7-2) have helped his team gain valuable experience that could translate into victories down the stretch.

“If you look, it was a very tough non-conference schedule,” O’Leary said. “The vast majority of the teams have winning records, and significantly strong winning records.

“I think we have a better understanding of how we want to play,” he added. “We’re fitter, we’re stronger and we’re putting together consistently strong efforts.”

Now that he feels his team is getting better and more competitive, O’Leary feels it is time to take that next step forward.

“We’ve got to take that leap from being competitive to winning,” he said. “It’s not an easy leap to make, but Saturday would be a great time to start it.”

Kickoff is set for 7 p.m. Saturday at Sweeney Field.