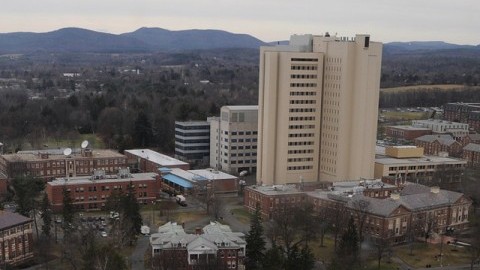 The U.S. News and World Report recently released its annual ranking of best global universities, placing the University of Massachusetts as 106th on a list of 750 institutions.

Notably, UMass was recognized as a model research university, ranking 102nd globally and 53rd regionally, with agricultural sciences, arts and humanities, environmental science, chemistry and space science all ranking within the top 100 in their fields.

Wesley Autio, director of the Stockbridge school of agriculture, said that he finds the rankings “spectacular” and appreciates that his department is being recognized for its research. The agricultural sciences field at UMass – which includes food science and veterinary and animal science – was ranked as 10th worldwide.

“In Massachusetts, particularly, we’re overshadowed by a couple of the most important research schools in the world: Harvard and MIT,” Autio said. “But there are students throughout the University that are doing fantastic work.”

The research being done within Stockbridge is quite varied due to the variety of agricultural activities, Autio said. Projects include examining the development of antibiotic resistance, understanding food systems within the ethnic populations of cities, developing plants that are able to consume soil contaminants and understanding how plants respond to stresses that result from climate change.

Over the years, Autio said that Stockbridge has not necessarily made large breakthroughs in research, but its research has had major impacts if you consider the influence over multiple years.

“We furthered a lot of understanding,” he said. “We’ve changed recommendations for farmers and golf course managers, for landscape managers and all sorts of different people who are in agricultural industries.”

It is important to note, however, Autio said, that the food science and veterinary and animal science departments contributed to the ranking. Together, the agricultural science field has “some of the most cited researchers in the University.”

Rafael Fissore, head of the veterinary and animal science department, is “very proud of the faculty and the undergraduate and graduate students” who are contributing to research.

Although graduate students do most of the veterinary and animal science department’s research – about 55 are conducting research this semester – roughly 35 undergraduate students also participate in any given semester, often through the honors program.

Undergraduate students, Fissore said, are “intimately involved in research,” something that he said is evident through their contributions to different research papers. For example, one student wrote up her findings concerning a gene that, when eliminated from a person’s DNA, caused the individual to become sterile.

Because of the three different categories, the research that is conducted is quite diverse. Projects currently underway focus on the mechanisms that prevent disease, which embryotic cells form which organs, developing male contraceptives and causes of sterility, which are all factors that make an individual prone to breast cancer; and the effects of insecticide exposure.

Fissore and Autio credit UMass’ rise as a top research university to the addition of new faculty and the construction of better facilities, such as the Integrated Sciences Building and the soon to come Physical Sciences building.

“Young faculty are the engines that drive university research [and] there’s been a steady flow of change to bring in new faculty,” Autio said. “We could certainly attribute [our ranking] to some new spaces that are allowing people to be more productive.”

Autio hopes that receiving such positive feedback from organizations like the U.S. News and World Report will attract more students to Stockbridge and other highly productive research departments on campus.