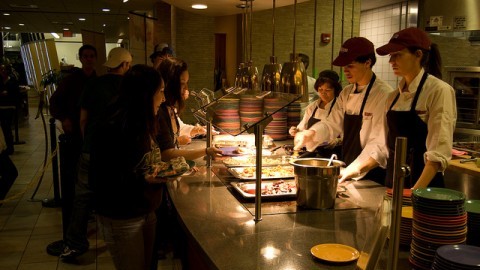 True to its name, the University of Massachusetts’ Real Food Challenge has faced a lot of obstacles during its relatively short, but successful, life on campus.

Members of Real Food Challenge care deeply about humane food services, both on campus and worldwide.

Drew Fournier, a junior who has been involved with the organization since his freshman year, said the two “central hurdles” have been cooperating with UMass Dining and being representative of what the student body wants.

He also said UMass Dining and the student body have two vastly different views on the food system. Real Food Challenge tries its best to bridge those perspectives.

The organization must align UMass Dining’s values as a business with student ideals. Fournier said this balance is hard. In the end, they need to make the decisions that will make the most economic sense for UMass Dining in the long run.

Since most on-campus residents have some type of meal plan, students have the right to decide what foods the dining services are sourcing, Fournier said.

UMass has the second largest university dining program in the country, and does not outsource its food, which most schools its size do. Outsourcing means having another company provide the food for campus consumers, which typically serve other customers like prisons, amusement parks, hospitals and K-12 schools.

Because UMass does not outsource, Hannah Weinrock, a recent UMass graduate and Real Food Challenge member who has worked with UMass Dining, said the school has fewer barriers.

UMass Dining is economically dependent on the tens of thousands of UMass community members when school is in session. Students are crucial in contributing to the Pioneer Valley food market, and sourcing local food directly impacts local farmers’ livelihoods and keeps the area’s economy strong.

Weinrock said the entire process is strategic publicity for UMass Dining because it follows a national trend of other schools sourcing their food locally.

It is important to remember, Fournier said, that UMass Dining wants to maintain a good reputation. Therefore, to stay “on top of the game,” it looks for trends in the student body and competing institutions. If students communicate with Dining Services about the kind of food system that they like, it will listen, Fournier said.

He said that the Real Food Challenge considers purchasing decisions, kinds of food supported, food transportation methods to campus, and who comes in physical contact with the food.

Fournier also said that Real Food Challenge could do a better job at attracting voices into spaces that best represent the campus community, and getting more diverse perspectives into their vision of the food system.

A new goal of the Real Food Challenge is engaging a wider audience on campus and increasing student awareness about their mission, he added.

Weinrock said, “That’s where a lot of the tension often lies: we are students, we care about these things – especially in interacting with Dining, we are often in conversations that are about purchasing contracts and about things that very much should be public and should be things that all students should have access to. So, one of the things we are constantly pushing for, and one of the things we are working to do, is to bring those conversations to students.”

The Real Food Challenge was introduced to UMass in January 2012. After a presentation by a regional team, a small group of students, with faculty and the Chancellor’s Sustainability Committee, began exploring the possibility of making the Real Food Campus Commitment, which Chancellor Kumble Subbaswamy signed in spring 2013.

At UMass, the organization is comprised of two sub-organizations: the Food Systems Working Group, made up of students, staff and faculty members, and Real Food Collective, the registered student organization.

The Real Food Collective, a branch of the Real Food Challenge, focuses on student engagement and education on real food.

Fournier said he has seen change since he joined two years ago. Measures that UMass committed to, like creating spaces where diverse members of the food system can come in and influence the way that we shape our food system on campus, are finally being implemented.

Before, when Fournier started, things were very exploratory. Focus was on gaining more student involvement and signing the commitment. Now, they are focused on institutionalizing the campaign and developing the mutually respectful relationship with Dining Services that will subsequently make beneficial food shifts.

They are also expanding dialogue. Last fall, the Real Food Challenge hosted a town hall meeting in Amherst to discuss food policy. Seventy-five students and community members showed up to talk about what they wanted. Weinrock compared the dialogue to a conversation full of different languages: there were purchasing logistics and “things that went over my head.”

Jess Newton, who joined Real Food Challenge last fall, believes the biggest obstacle has been getting support from the University. Because the organization consists of busy college students, it is hard to keep momentum.

One of the biggest contributions of Real Food Challenge has been implementing the University’s commitment, which aims to shift 20 percent of the food UMass purchases to “real food” by the year 2020.

“Real food” sustains all those involved with the process of getting the food from the ground to the table.

The commitment requires UMass uses the Real Food Calculator, which can be found on the national Real Food Challenge website, to decide whether a food provider actually supplies “real food” and thus audit whether the school’s purchases meet this 20 percent.

“For various reasons, we haven’t run the calculator in the past year, but it’s starting up again this fall,” Weinrock said. These reasons are confidential, she said.

When they do run the calculator, which will either be this semester or the next, changes due to the implementation will be apparent.

The commitment also passed the Real Food Policy, which guides the University’s procurement of “real food.”

Real Food Collective student representative Maria Fallavollita said the plan also includes annual progress reports, which can be accessed online, that relate the shifts necessary for the commitment. However, the progress reports will probably not happen for another year.

“All of this is kind of coming into formation,” she said.

UMass is the largest school that has signed the commitment, being one of over 60 nationwide over the past several years.

Fallavollita, who plans on attending Food Systems Working Group meetings this semester, said the relationship with UMass Dining requires “finding the balance between pushing and knowing when not to push too hard.”

“This is something we can only accomplish working with Dining,” Weinrock said.

The Food Systems Working Group, which formed in the spring of 2015, focuses on overseeing the implementation of the commitment and maintaining inter-community contact with UMass Dining and stakeholders.

Weinrock, a public health major interested in a career in food justice, said working with UMass Dining has been a “big learning curve” full of “trial and error.”

“As with anything, there are different bottom lines sometimes,” Weinrock said. “It’s not always easy.”

Among the changes already made due to the commitment, UMass Dining has switched to sourcing local foods like honey, milk, granola from an organic company in Maine called Grandy Oats, and produce such as apples.

Though sourcing local produce can be hard at the volume UMass needs, Weinrock said, it is still easier than sourcing things like local fish or meat.

UMass Dining eventually wants fish from local, community-based fishermen because they work closely with organizations that support local fisheries in New England. It also wants to source local and humane meat on campus, though there is not an accessible or affordable supply, nor are there many local humane slaughterhouses in the area.

Weinrock said this illustrates an interesting balance between change that student members propose to UMass Dining, and the initiatives and challenges that UMass Dining has itself. Some of the conversations deal with large-scale changes, sometimes considering changes in the regional food system.

Weinrock said over the past five years or so, there has been a significant push for active, just and sustainable food on campus. Some changes are certainly attributable to the commitment, while some are attributable to other similar movements. These include unrelated, outside grants that are a result of the ripple effect conversations started by Real Food Challenge.

However, Weinrock said, all of it is due to a growing interest of students to see and make a difference on campus.

Fournier and Weinrock agreed it is hard to say how much of UMass Dining’s current endeavors are a direct result of the Real Food Challenge.

“I don’t think there’s any way to know necessarily exactly what caused it, but Real Food Challenge had a significant role in instigating a lot of the conversations that have happened since then,” Weinrock said.

The organization is a chapter of a larger, national campaign. They had a recent weekend retreat where national leaders of the organization visited campus. UMass’ chapter hosts a couple of these leaders, recent college graduates who were either in Real Food campaigns as students or currently have food justice-related careers, about once a semester.