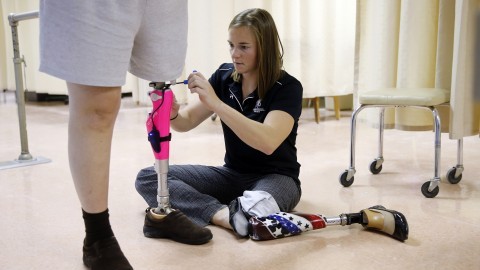 Two University of Massachusetts researchers are using resources and funds they received to conduct research in improving prosthetics for lower limb amputees through mechatronics, robotics and kinesiology.

Associate professor Brian Umberger of the Department of Kinesiology and Frank Sup, director of the Mechatronics and Research Laboratory and assistant professor in the Department of Engineering, recently received a $630,331 three-year grant from the National Science Foundation and a $20,000 grant from the National Center for Simulation in Rehabilitation Research at Stanford to carry out their research initiative.

“Since this involves the combined efforts of the Department of Kinesiology and Mechanical and Industrial Engineering, we want to understand how humans and robots work together, especially in the case of addressing human immobility with robotics,” Sup said.

This area of research is rehabilitation robotics, chosen by the researchers because of the many problems faced by amputees that can be addressed by introducing a replacement prosthetic into human life.

Sup described how there was “a great risk for developing ulcers and sores” and how psychological experiences that can affect amputees negatively often arise out of the difficulty the body experiences in adapting to poorly designed prosthetics. This makes the creation of effective prosthetics very challenging.

Because of this, their work uses an understanding of biomechanics and human locomotion to design a robotic lower limb prosthetic that eases the physical and psychological challenges amputees must face while adapting their bodies to the device. The prosthetic is also designed to help amputees embark on a transition to an entirely new lifestyle.

Sup and Umberger direct their research to help as many people as possible, by addressing the average cases of lower limb loss. Sup and Umberger hope to accomplish this by designing the prosthetic in a way that will especially help older adults be more tolerant to the physiological toll wearing a prosthetic takes.

Umberger and Sup cite the use of predictive models, such as biologically realistic physical models of the human skeletal system and predictive computational simulation to aid their robotic limb design on amputee subjects. This allows the researchers to closely replicate and experiment, in order to optimize the function and characteristics of the robotic piece, making it easier for it to integrate successfully and easily with the amputee’s body.

They have created their first prototype that is targeted below the knee and above the ankle.

“We also have developed initial computational models for amputee subjects to run the prosthetic simulations with the prototype,” Umberger said.

The expectation criteria they propose to make their designs advanced is the focused implementation of two powerful features. The first feature is extending the gait cycle of the robotic leg that is usually missing in an amputee, and injecting power into it.

The second feature is reducing the pressure distribution within the socket of the lower leg. Both researchers agree that these are the tradeoffs required to reduce physiological demands in design and minimizing the physical load on the amputee’s body.

Sup and Umberger said that, with three years progress, they “hope to achieve the goal of implementing these features as well as developing a refined computational methodology when robotic hardware continues to advance and new materials emerge within the rehabilitation prosthetics market.”

Tanaya Asnani can be reached at [email protected]

Editor’s note: In a previous version of this article, Frank Sup’s name was misspelled a number of times, the Mechatronics and Robotics Research Lab was misidentified as the department of Mechatronics, and gait cycle was misspelled. The errors have been corrected above.