UMass rowing competes at historic Head of the Charles Regatta 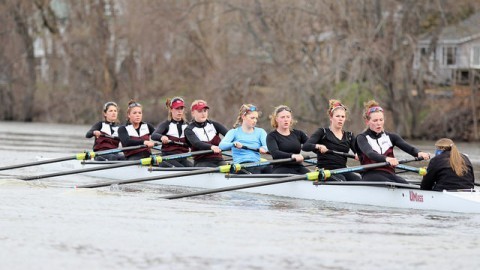 Competing at the historic Head of the Charles Regatta in Boston, the Massachusetts rowing team continued to show why it should be considered one of the best in the nation with another successful weekend.

While the rest of the UMass campus was largely participating in various events during the school’s homecoming weekend, Minutewomen coach Jim Dietz said his team was competing in “America’s homecoming.”

“Everybody knows everybody at this Regatta and it’s just an incredible event that has over 10,000 athletes competing, which makes for a great weekend of racing,” Dietz said.

UMass kicked off its racing schedule Saturday with a ninth place finish in the Women’s Club 8+. With just 38 teams competing, the Minutewomen finished with a time of 17:44.66, just nine seconds behind fourth place finisher Northeastern.

The Women’s Championship 2x boat concluded a solid first day in which the UMass duo of Krysten Menks and Allanah Rubi-Mooney placed 13th with a time of 20:37.10.

On Sunday, the Minutewomen enjoyed their most successful day of the weekend, medaling in all but one of the events for the day.

Sam Kolovson led the charge by earning a silver medal in the Women’s Club Singles with a time of 22:02.898.

Dietz was impressed by Kolovson’s performance in the race.

“I couldn’t be more pleased for somebody who’s worked so hard, and to see her in her element, racing the single and doing that well, was absolutely fantastic,” Dietz said.

He also thought Kolovson’s second-place finish did wonders for team morale and energy for the remaining races.

“I think her performance pumped up the squad for the rest of the day, and rightfully so,” Dietz added.

“We had a difficult start in that we began in last position, but I was glad to see that we passed eight boats pretty quickly, which is impressive considering there were nationally ranked teams in that race,” Dietz said.

In the final race of the meet for the Minutewomen, the Women’s Lightweight 4+ squad – composed of Estefi Marti Malvido, Carly Zanatta, Jill McGill and Hallie Dunlap – came away with a silver medal finishing at 19:41.218.

“Another great performance by the gals since we started in third position, ended in first position and got second overall so it was a fabulous way to cap off the weekend,” Dietz said.

With cold weather sweeping the northeast region, Dietz said his team was unfazed by the frigid conditions.

“We were prepared for worse conditions than what we had. We did have high winds and it only really got cold today (Sunday) once the sun went down, but as long as it’s not raining the girls are happy” Dietz said.

Moving forward, Dietz said he feels his team is on the right path in order to achieve success come the spring season.

“The fall season is a kickoff for the spring season and the team has been working extremely hard,” Dietz said. “They’re starting to see that the hard work is paying off, so we’re in a very good spot right now and feeling extremely confident.”

Next weekend, the Minutewomen head to Mercer, New Jersey to compete in the Collegiate Small Boat Challenge on Lake Mercer.