UMass rowing prepares for Head of the Oklahoma 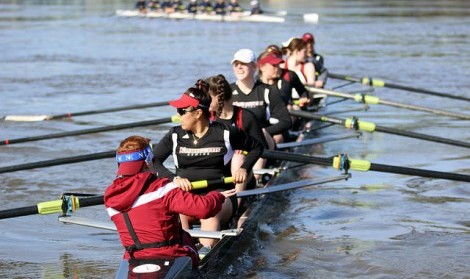 The waiting is almost over for the Massachusetts rowing team.

Nearly five months after placing 20th in May’s NCAA Championships, the Minutewomen will open their fall schedule with the Head of the Oklahoma this weekend. This meet will feature over 1,000 athletes as well as over 40 collegiate and community clubs, including prominent programs such as University of Southern California, and Southern Methodist.

Now that the season is here, coach Jim Dietz is excited for his team to compete in Oklahoma and gain valuable experience.

“It’s a nice experience for the ladies in that you’re competing on an international level course that was specifically built and designed for rowing,” he said.

The first meet can always bring some unknown challenges, but Dietz believes his team will perform well in the early part of the season.

“We’ve got some really good skullers,” Dietz said. “Sophomore Carly Zanatta won the singles last year and also won the doubles with senior Krysten Menks, then they combined with senior Sam Kolovson and won the quad so every year we start okay.”

Dietz also added that the number of returnees from last year’s squad is a reason to be excited. UMass lost only three seniors to graduation on a team that won the conference title, with some talented freshmen that Dietz hopes can make an immediate impact.

“We have Daniella du Toit coming in from Zimbabwe who is an incredibly good skuller and Jill McGill who is a fabulous skuller that both have desires to perform well,” he said.

Dietz added that some of his athletes, including Zanatta, have goals to make their respective countries national teams, which can only benefit the Minutewomen’s success even more.

“There’s always the diamond in the rough of what you don’t know you have in the walk-ons that we identify on campus that were extremely successful in other sports that are trying rowing for the first time,” Dietz said. “That helps build the base here and that’s what’s important for success here long term.”

After this weekend’s meet, Dietz points to the Head of the Charles in Boston as another crucial meet for the team. He pointed out that his team has qualified four boats from last year, and the fact that they will be racing against alumni from past years who moved on to different clubs.

With consistent success comes consistent goals, and Dietz explains his goals are not much different from past years.

“Our team goals are simple,” he said. “We want to teach people to row well and to build a physiological base that’ll get us to a point where we can compete for the conference championships, as well as the NCAAs.”

“My goals for the fall are simply let’s just go to the races, have a good time, see how we’re doing and build the base so when it’s imperative that we win, we deliver the results” Dietz added.