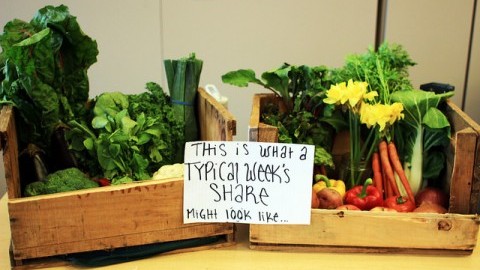 According to College Values Online’s website, the organization selected the top 30 student farms based on an initial pool of 100 candidates and awarded points based on a variety of categories such as total acreage, organic certification, academic courses available and distribution to the local community.

The farm, according to a UMass press release, features 12 acres split between the UMass Research and Education Farm in South Deerfield and the Agricultural Learning Center in North Amherst.

Benjamin Aufill, sustainability communications and marketing manager for University Relations, said roughly 20 students who are enrolled in the student farm program through the Stockbridge School of Agriculture have access to both of the two locations.

The group of students are responsible for planting, cultivating and harvesting the food, as well as working with their numerous clients which include two Big Y supermarkets, Earthfoods Café and UMass Dining Services.

“They really do it all,” Aufill said in a phone interview. “The program is teaching them from start to finish how to grow a product and sell a product…There are few instances in education where you’re going to get 100 percent like this and I think that’s what makes the student farm so unique and fun.”

In addition, students in the program head a 60-member on-campus CSA and the UMass Student Farmers Market, which offers fresh food to the student body every Friday from noon to 4 p.m. on the lawn in front of Goodell Hall.

Such an encompassing program helps to mold students who are well-prepared to open their own farms and work for sustainable farming organizations, according to the press release.

“It’s good to be in an environment where you can make mistakes, because in real life you don’t get that opportunity,” Aufill added.

Aufill said this is the first time that UMass’ student farm has been included on College Values Online’s ranking, and he is hopeful that the program’s success will attract more prospective student farmers.

This is not the first time College Values Online has taken notice of Amherst in recent months. In July, the organization ranked Amherst 27th on a list of the 50 best college towns in the United States.