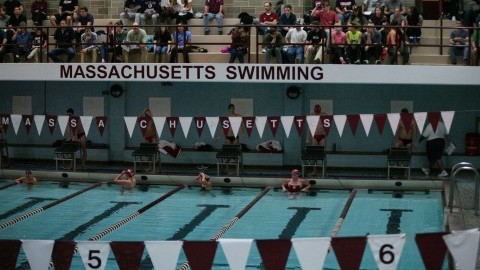 The Massachusetts swimming and diving teams collectively have seven more regular season meets this season before the start of Atlantic 10 championships on Feb. 17. This stretch primarily consists of large invitationals that several schools attend.

A four-day long competition between all the teams in the conference, February’s conference championship weekend is one of ultimate consequence for the swimmers and divers. However, preparation and work toward peak form begins now.

“It’s long-term, it’s not about each week, it’s about one weekend and that that weekend is in February,” UMass women’s coach Bob Newcomb said. “That’s what we really focus on. We spend the whole year getting ourselves ready for that weekend.”

While the men’s and women’s teams’ results in each invitational against individual opponents certainly matters, the focus of the teams remains on progressing throughout the season rather than on a specific opponent in dual meets.

When speaking of the Minutemen’s defeat against Army on Oct. 16, Minutemen coach Russ Yarworth affirmed this belief.

“Swimming is a sport that is often based on a training cycle and it’s all about focus, not to take anything away from Army,” Yarworth said. “They’re a great team, but they were right at the end of their cycle and ready while we were right in the middle of our cycle and it was tough.”

He expressed that the end of that cycle aided in the Minutemen’s 176-122 victory Saturday over Boston University.

UMass diving coach Mandy Hixon echoed these sentiments when she was expressing her surprise about the recent strong performances of her divers, in which the Minutewomen earned first and second in both events.

“They really shouldn’t be having much success (because) we’re training the heck out of them, they’re doing a ton of dives and they’re conditioning in the weight room hard right now so it’s not a time they should be diving very well,” Hixon said.

While both the men’s and women’s diving teams grabbed first and second place at each of the first two dual meets, this isn’t the type of performance expected this early in the season, according to Hixon.

“I don’t expect them to be diving really well till the end of January,” she said.

Even with four competitions this month, the team continued to physically train like it is in preseason mode. Workouts and practices have been carried out with as much intensity as any, regardless of any soreness that may result from this training. The goal is to continue to physically grow and improve for one weekend specifically, not to be fresh for each time the team goes out there for a meet this early in the season.

As Newcomb said, the teams’ eyes are ultimately on three days, and those three days – the conference championships. The Minutemen will enter the tournament as the defending champions and look to defend their A-10 title.

Christopher Marino can be reached at [email protected]