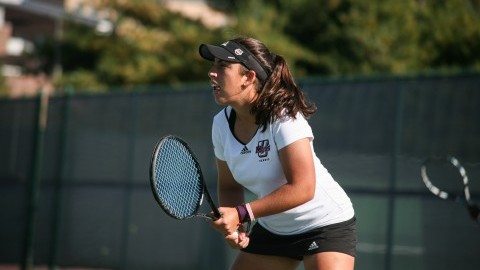 The qualifiers and the main draw players participate in the Northeast Regionals in Hanover, New Hampshire. Six Minutewomen have qualified for the tournament, including four singles in senior Carol Benito, freshman Ruth Crawford, junior Anna Woosley, and sophomore Ana Yrazusta.

In preparation for the tournament, this week at practice UMass has been tapering. Tuesday’s practice involved light hitting drills and exhibition matches to get the team tuned up and ready to go for Thursday. Coach Judy Dixon said she wanted her players to be mentally focused and prepared to play their best game so that some athletes can make a deep tournament run.

Crawford said she is excited for the tournament and added she’s hoping to avoid any feelings of being overwhelmed by the stage. She said she prepares by “focusing mentally, always talking to coach and envisioning (her) game.”

Dixon further elaborated about how preparing for a tournament can be different from looking ahead to a dual match. In a dual match, the team has one opponent to focus on, whereas in a tournament, the individual players are competing for themselves.

Outside of singles play, the Minutewomen’s doubles team of Benito and Yrazusta are currently seeded fourth in the northeast and should be seeded fairly high in the tournament. Seeing this pair make it deep in the tournament would be a huge boost for the team.

UMass boasts an experienced group of players providing for great depth. The team only has two seniors currently in Benito and Arielle Griffin. Despite this youth, the team is looking very strong heading into tournament play.