Understanding Keith Richards in ‘Under the Influence’ 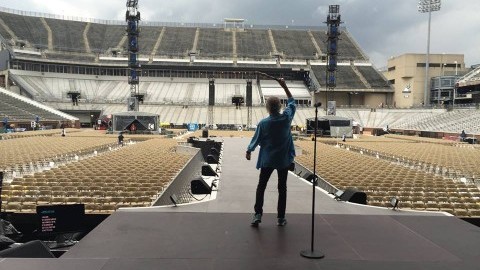 Keith Richards is an anomaly. His legend has come to supersede him. Plenty of people know about his excessive drinking and drug use, sexual promiscuity and various run-ins with the law –and, of course, his unexplainable persistence and steadfast devotion to The Rolling Stones as maestro to Mick Jagger for more than 50 years.

But none of this is explored in Morgan Neville’s “Under the Influence,” a new documentary about the acclaimed rocker that’s now available to stream on Netflix.

The film was made while Richards was putting together “Crosseyed Heart,” his first solo album in more than 20 years. “Under the Influence” employs a unique style, capturing Richards as both traditional individual while also easygoing and level-headed. Often times, Richards is calm and relaxed.

With that being said, he knows when to be serious and get down to business. We come to understand Richards as someone who is deeply fascinated with the origins of his own music, someone who is forever grateful for the blues and the artists who influenced him.

And those influences – Howlin’ Wolf, Buddy Guy, Chuck Berry, Lead Belly, Robert Johnson and, of course, the great Muddy Waters – are as indelible as they are inspiring. These artists became the basis for Richard’s musical foundation.

In fact, Neville includes old footage of the Rolling Stones performing their own version of “I Just Want to Make Love to You,” a song originally recorded by Waters himself.

While the film manages to devote a lot of attention to Richards’ influences, it provides little insight in to Richards’ past. His love of family, the relationship he rekindled with his father, and the evolution of his offspring – are all biographical elements left until to the end.

Through the story we learn that he left home at 17 years old without his father’s permission and has been on the road ever since, always calling the stage his true home.

Richards’ first glimpse of the United States came as a boy when he heard Elvis Presley on the radio. Presley provided Richards with a sense of possibility amidst the bombed-out, rubble-filled England of the late ‘40s. That, along with his mother’s favorites such as Ella Fitzgerald and Billie Holiday, helped provide the melodic spark for which Richards has been forever captivated and inspired.

Lately, Richards’ center of attention has moved to the studio, where he worked to construct “Crosseyed Heart.” Here we see a Richards who pays great attention to detail, knows immediately when something works and when it doesn’t. To paraphrase Tom Waits – who is noted musician and friend of Richards and appears at several stages throughout the film – when all of the musicians are tuning up in the studio, what happens next is totally unpredictable.

Everyone is waiting for the magic to happen. For me, this was the most fascinating aspect of the film, because fans are used to seeing Richards as a member of the Rolling Stones and perceive him only in relation to his fellow band members. Here, when we see Richards in the studio, the entirety of the spotlight is on him.

The film ultimately illuminates Richards as a talented rock star who never tries to be someone else. He displays his cheerful wit as he chain-smokes cigarette after cigarette, ending almost every sentence with deep distilled laughter. His mannerisms give off a relaxed confidence, as if he perfectly understands the reason for why he plays music.

Richards, 71, talks about the concept of growing up and how he believes it can never be achieved. He says, “You’re not grown up until the day they put you six feet under.” That seems telling, especially when so many people never know how they are supposed to act, or how quite to be an adult.

“Under the Influence” is a well-made, enjoyable film. It documents Richards’ musical individuality while illuminating the respect and admiration he has for his own influences. Richards’ calm and composed manner seems to suggest that he is certain of nothing, especially music.

The half century he has devoted to his art seems to suggest a level of resilience not found in most walks of life. According to Richards, “Music is at the center of everything.   It’s something that binds people together, through centuries, through millennia, it’s indefinable and no ones ever going to have the answer to it, but it’s great fun exploring.”